Those who think that excusing those charged with criminal offences is the stuff of 60s films (one of the crims in The Italian Job being described as “he’s just done four years in Parkhurst and you can trust him”) or satire (the Pythons’ Dinsdale Piranha, who nailed people’s heads to coffee tables but “was a lovely man ... he bought his mother flowers and that”) may have to think again after yesterday’s events.

Royal Editor for the Super Soaraway Currant Bun Duncan Larcombe has been charged with conspiracy to commit misconduct in public office, along with a Sandhurst colour sergeant and his wife. It is alleged that payments totalling £23,000 were made by the Sun for Royal or Sandhurst related stories over a three year period. But Larcombe’s fellow hacks are not in the least ashamed at the news. 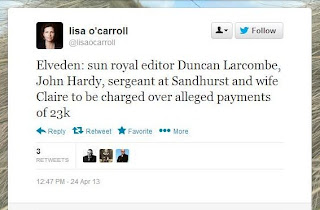 After the Guardian’s Lisa O’Carroll had Tweeted news of the charges, out came Larcombe’s fellow hacks not to suggest there had been any wrongdoing, but to praise him unequivocally. Neil Chandler of the Daily Star was typical, telling that “As I’ve said before, Duncan Larcombe is a top bloke”. Perhaps he was equally gushing about Larcombe’s former Screws contemporary Clive Goodman. 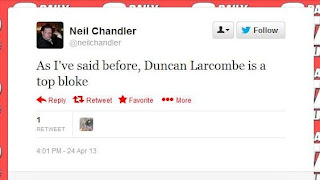 But Chandler’s comments were mild when compared to those of John Troup, who thundered “Thinking of my buddy Duncan Larcombe, thrown to the wolves by Murdoch’s lickspittles and now in the hands of Inspector Knacker’s Wehrmacht”. Yes, it’s always wrong for a hack to get charged, but not for all those unfortunate souls who over the years have been found guilty by the tabloids beforehand. 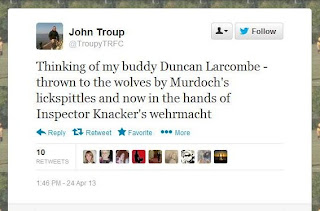 And note the hyperbolic Third Reich reference, just for good measure. Troup was not the only one thinking “wolves”, though, as Matthew Bell demonstrated: “Duncan Larcombe is an excellent journalist who should not be thrown to the wolves. I hope he gets the support he deserves”. That would be the kind of support that no hack on any paper wished Christopher Jefferies to have. 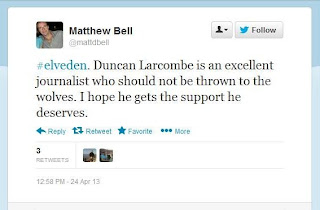 None of those who scrabble around the dunghill that is Grubstreet gave any sign that their sympathy for Larcombe was so at odds with the attitude that they and their fellow hacks had previously displayed to any of their targets. Larcombe being arrested and bailed well before being charged was A Very Bad Thing, but the McCanns being in limbo somewhere near Portimão was not. 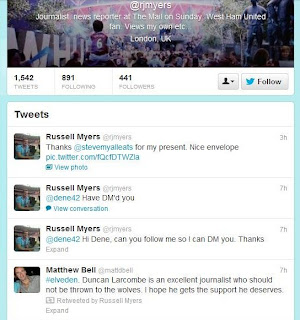 And if you look at Bell’s Tweet, it has clearly been retweeted by none other than Russell Myers, the Mail On Sunday hack who obsessively pored over teenager Paris Brown’s Twitter feed just to dig up some dirt, before misleading her about his paper’s interest and then dumping on her via a front page splash. No doubt that kind of behaviour is also, to some, “excellent” journalism by a “top bloke”.

There are so many hacks who still don’t get it. No change there, then.
Posted by Tim Fenton at 10:39

I suppose if you were to feel sorry for the hack, you could say that Royal Editor for the Sun is stretching the concept of 'public office' a bit far.