The perpetually thirsty Paul Staines and his obedient rabble at the Guido Fawkes blog often claim to have “sources” for their dubiously crafted output. Staines himself once pretended to be joking after he let slip that multiple sources might mean asking one source more than once. But, sadly, all too often the Fawkes blog just goes ahead with no sources at all. 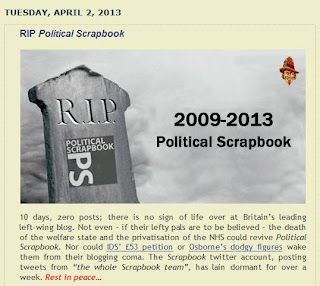 Behold the usual level of accuracy

So yesterday afternoon came a post claiming the demise of Political Scrapbook. That would show Laurence Durnan and his fellow rotten lefties! This post was based on there not having been any new material on Scrapbook for all of a week, well, OK, a week and a couple of days. Of course, the Fawkes rabble could have checked first, but what the heck, there’s that legendary nimbleness to consider, eh?

And so it came to pass that The Great Guido posted the supposed end of Scrapbook at 1638 hours yesterday (note that the amateurish sticking of the Scrapbook logo onto a headstone has not even been modified to provide perspective), and this came as news to everyone else, especially Durnan and his pals. The Fawkes balloon remained airborne for precisely two hours and one minute.

“Rumours of our demise are greatly exaggerated” commented Scrapbook at 1839 hours, managing a more sensible placement of their logo as well. Sometimes one cannot spend every waking hour posting, and especially when involved in the press regulation debate, which the Fawkes folks ought to know because they claim to also have been thus involved.

And in any case, The Great Guido has no room to call anyone out for missing a day or two: most weekends, the only content on the Fawkes blog is “Saturday Seven Up” and a Sunday plug for their Sun column. The Fawkes blog is almost exclusively a weekday only affair as regards new content. And at least Scrapbook is not in hock to the editors and proprietors of the Fourth Estate.

Still, it passes the time while waiting for the next command from their new bosses. Another fine mess, once again.
Posted by Tim Fenton at 12:37