TPA – Get A Life, Poor Diddums

As if the “Rally Against Debt” did not provide sufficient proof that the so-called Taxpayers’ Alliance (TPA) had next to zero grassroots support – as I’ve been saying, more or less, since I started this blog – another example of how the TPA enjoys less support than the Peoples’ Front of Judaea has come from one of its own stalwarts, while also offering a side helping of risible pretentiousness.

Former TPA intern Jago Pearson, now apparently busy studying at Loughborough University, has been following the Zelo Street Twitter feed, for which I say good for him: any tendency towards good taste from the otherwise Philistine TPA is to be applauded. Sad to say, though, Jago is deeply unhappy with my characterisation of the Astroturf lobby group which he holds in such high regard. 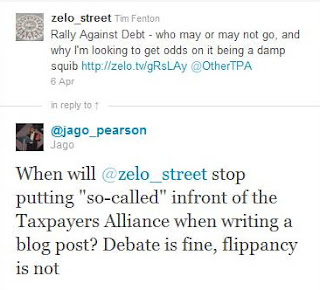 For starters, (a) If I want to characterise the TPA, or any other group, in a particular way, then I am free so to do. Moreover, (b) the TPA is not an alliance of taxpayers: were this so, the “Rally Against Debt” might have garnered more than the measly 350 (including hacks and snappers, but excluding Toby Young) that turned up. The TPA is, once again, an Astroturf lobby group.

Moving on, (c) Jago has confirmed the TPA’s absence of grassroots on Twitter: as he is now in Leicestershire, he has become the Leicestershire TPA, rather as Tim Newark became the south-west TPA on moving to Bath, although the Islington TPA (prop. Tim Newark) had to close. Thus the likeness to the Peoples’ Front of Judaea.

And finally, (d) Jago will have to get used to my putting the boot in on the TPA, because I consider them to be, in the words of Terry-Thomas, an absolute shower. In conclusion, (e) he should try not to be so pretentious and thin-skinned, and therefore should (f) see title of this blog post.
Posted by Tim Fenton at 19:07