The potential reduction in sunspot activity from around 2020, which I looked at the other day, was immediately picked up by those parts of the media most willing to promote climate change denialism, and during the past 48 hours the bandwagon of false causation has started to move.

And that it has gathered pace is confirmed by the Daily Mail’s obscenely overpaid churnalist Richard Littlejohn, whose latest tedious outpouring begins with a few routinely dishonest assertions, just for good measure. Fat Dick drops the porkies into his copy with an accomplished nonchalance, but they are porkies nevertheless.

Let’s take it from the top, shall we? First of Dick’s claims is that “The world is about to enter a mini Ice Age”. It is? No, it isn’t. The scientists he cites, as I pointed out, made no connection between reduced sunspot activity and a cooling trend. 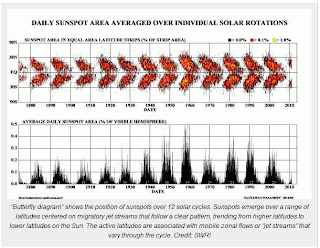 As can be seen from this graph of sunspot activity, it peaked in the late 1950s. 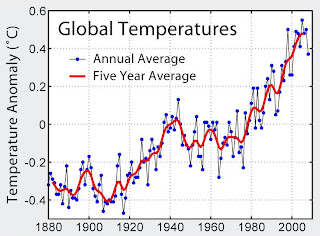 However, checking this against recent global temperatures, it can be seen that the temperature anomaly was still negative – a cooling trend – well into the 1970s. Sunspot activity has been declining, although temperature anomalies have since gone significantly positive – a warming trend.

Fat Dick then tells “Last time this happened, between 1645 and 1715, global temperatures plummeted”. What the scientists are considering is a solar cycle of eleven years, not 70. And temperatures did not “plummet”, although they were lower and winters more severe.

But Dick saves his biggest whopper for last: “The truth is that the world has actually been getting cooler in recent years”. Ah, the conjunction of “truth” and Littlejohn – if only it could come to pass. 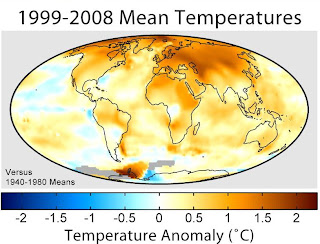 Here’s a global representation of temperature anomalies over the period 1999 to 2008. Most of the earth’s surface shows positive readings, which means it’s getting warmer (so no cooling). 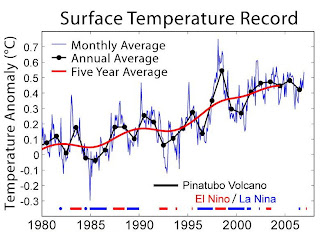 And here’s a more recent global surface temperature record, showing that even the La Niña events are having little effect on the upward trend. 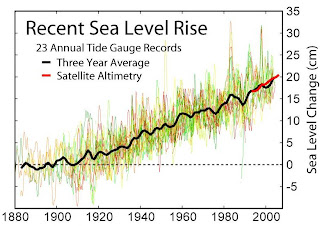 And just for good measure, here’s a graph showing rising sea levels, as I’m sure Dick would want to try pulling the fast one about them not rising. 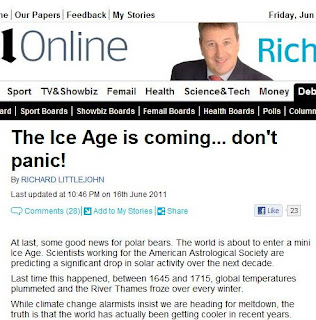 But the laugh-out-loud howler that puts the lid on the latest Littlejohn rant-fest is when he describes his scientific source as “the American Astrological Society”. Dick, you’re a Dick. Next time, try doing some homework and get your copy subbed.
[UPDATE 1305 hours: The Mail Online article was amended, 47 minutes after I originally posted, to replace "Astrological" with "Astronomical", but I already took a screen shot. Moreover, as I posted the other day, the organisations involved are the National Solar Observatory (NSO) and Air Force Research Laboratory (AFRL), so the Littlejohn rant is still wrong. I also note that none of his eager band of commenters picked up on the howler: on those comments, I have no further comment]
Posted by Tim Fenton at 10:03