Guido Fawked – Thanks To The Eye

Today has brought the return of the story concerning climate change secretary Chris Huhne and the suggestion that he got ex-wife Vicky Pryce to take a speeding penalty for him. What the Mail website has also inadvertently confirmed is that this is yet another story on which the Dacre hackery is cooperating with Paul Staines and his tame gofer Henry Cole at the Guido Fawkes blog.

Quite apart from there being very little new news on offer, except that Essex Police want to listen to a recording of a conversation between Huhne and Pryce supposedly held by the Sunday Times, today’s revelations make clear how little other evidence is available to the authorities – and how many false claims have already been pitched.

It is now clear that Police do not know, and have no chance of knowing, the identity of the car that was “flashed” on the M11 back in 2003. The Fawkes blog has previously suggested they could turn up the photo, but it has now been made clear that no images over five years old are retained.

The Mail has previously suggested that the offence took place where the motorway narrows from three to two lanes; it now transpires that it happened elsewhere, in a section undergoing repairs. And now the previous certainty that Huhne had been on the Ryanair flight from Strasbourg that landed at Stansted at 2223 hours that evening has disappeared.

So now the pursuit of the case depends on a taped phone conversation. But what was said by Huhne and Pryce is not reported in exactly unambiguous terms: the BBC qualifies its reportage with “allegedly”, the Mail tells that Pryce “apparently said”, and the Guardian also hedges with “apparently”.

Those, and other media outlets, have good reason to hedge their bets, given that despite all the heat, there has been very little light shed on this affair. And here we come to the involvement of Staines and Cole: the former was fingered in issue 1271 of Private Eye as the Mail’s source for its story about Foreign Secretary William ‘Ague and aide Chris Myers, which ultimately fizzled out with ‘Ague still in place. 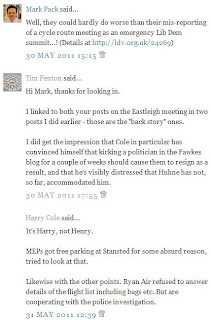 How can I be so sure that the less than dynamic duo have been in touch with the Mail over the Huhne story? The Mail report mentions Huhne having a free car park pass as part of its suggestion that he, and not Pryce, was driving. And in comments to a post on this blog at the end of May, Henry Cole makes ... the very same point.

But you don't seriously intend to suggest that the underlying story isn't true, do you. That would require such extraordinary naivety that it's hard to believe anyone thinks that.
It may well be the case that it can't be proved by the police and he is never charged. It's certainly the case that Guido Fawkes makes things up. But let's stay on planet earth while talking about this.
And pretty much every news source on the planet has already says Huhne got free parking, so there's nothing in your last point.

A range of views is welcome, but abuse is not. Hence the removal of one comment.