Telegraph – Disgrace It Is

There are those who still wonder why the Maily Telegraph is thus characterised, and consider it a paper of record. And they will no doubt believe today’s hatchet job on the Met Office, despite much of it being easily disproved by no more than a few minutes’ Googling.

First of the three evidential pillars is “Smaller forecasters, who claim to be often more accurate than the Met Office”. They call the bonus award – a whopping £800 on average – “a disgrace”. They would be the likes of Positive Weather Solutions (PWS), who predicted “another 1976” summer last year, and it wasn’t.

Another of those “smaller forecasters” would be Piers Corbyn, darling of the climate change denial lobby, who called the December cold snap after it had started (in late November), said the winter of 2010-11 would be the coldest for a century (it wasn’t: he revised this to “coldest December”), and that the freezing weather would return in late January (it didn’t). Corbyn and PWS are in no position to judge.

But then we are told that “Last month the House of Commons transport committee censured the body for failing to warn the public of the coldest December for 100 years”. The committee’s report can be read HERE. There is no “censure” to be seen.

And the third pillar of Telegraph evidence produces another damp squib: “The forecaster also predicted rainstorms for the royal wedding, leaving thousands of spectators baking in anoraks in the warm sunshine”. This is the most spectacular drivel: the Met Office forecast for the wedding, dated a day beforehand, predicts nothing of the sort. 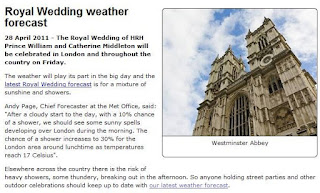 As can be seen, that forecast was for sunshine, with the chance of showers rising to 30% by lunchtime. Fortunately for all concerned, the showers held off. Moreover, the temperature, at a maximum of 17 Celsius, did not bring “warm sunshine”, so that’s another Telegraph invention.

That I can debunk the Telegraph article with a little Googling should not surprise anyone, and demonstrates once more that it is no longer a paper of record, but another repository of agenda driven copy, which may – or in this case may not – coincide with reality.

A disgrace? Those smaller forecasters had one thing right – the Maily Telegraph is just that.
Posted by Tim Fenton at 13:19

Never trust any of the press.