Newspaper proprietors in the UK tend not to seek the limelight: those running Associated Newspapers, owners of the Daily Mail, do not feature in the gossip columns or news pages, and neither do we see much of the Barclay Brothers, who own the Maily Telegraph. The Murdochs we know, only to find that they keep their social circle close and quiet: Rupe doesn’t do showy.

This example, though, has not extended to Richard “Dirty” Desmond, owner of the joke that is the Daily Express. Given the dreadful standard of original journalism at the paper, together with all the churned press releases and day old copy lifted from other media outlets, one might think the boss would stay in the background, but not Des.

This lack of reticence, together with the Express being too tight to stump up for the kind of photos that appeared in (for instance) the Daily Mail, has meant that when the Express ran a feature on Elton John’s White Tie And Tiara Ball, held yesterday, the accompanying photo was not of Fat Reg, Fergie and her daughters, or even Liz Hurley (with or without Warnie), but of a leering Des. 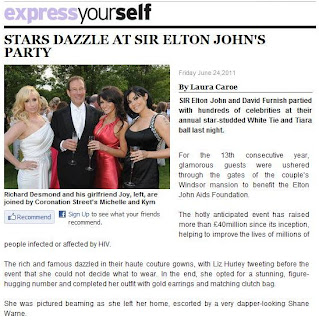 And it’s not only a cheesy looking Des, but also his new squeeze Joy Canfield (holding a suitable pose), together with two young women from the cast of Coronation Street. So that’s pulling out all the sleb stops, then. Express readers do get to read about Liz’n’Warnie, including the Hurley ensemble, but as mentioned, there is no photo.

Snatching cheap and nasty from the jaws of wall to wall glamour? That’ll be another Benchmark of Excellence.
Posted by Tim Fenton at 19:12