[Update at end of post]
Yesterday evening, using the old technology method of pad and pen, I jotted down a reminder to check the usual suspects within the Fourth Estate for a Euro-frightener about the Great EU Cucumber Bail-out. This was because although the money was being found from existing budgets – no call on any member state for any extra – the temptation to kick the supposed great Satan of Brussels would be too great. 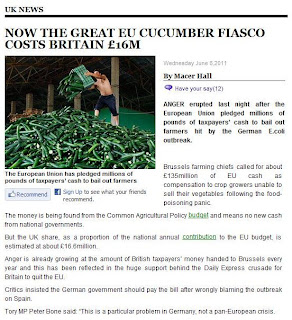 And so it came to pass, as today’s Daily Express has indeed found itself so tempted as to cross over from creative interpretation into straightforward dishonesty. Making a welcome return to the porkie rota is Macer Hall, bringing the expected “Anger erupted last night” (I was mildly disappointed not to get “Fury” for this, but never mind) despite there being neither anger, nor eruption.

But this time, there are also interesting nuggets elsewhere in the piece, starting with the choice of talking heads. Peter Bone is the obligatory fringe Tory MP quoted. Who he? Well, Bone has championed homeopathy, fraudulently asserted that the UK in 2007 had “arguably the worst health service in the Western world”, and employs his wife as an “executive secretary” on a salary getting on for 40,000 notes. So he knows all about spin and waste.

Also hot on waste, and taking the biscuit for most meaningless contribution to the discussion, is Emma Boon, one of the dubiously talented array of non-job holders at the so-called Taxpayers’ Alliance (TPA). La Boon asserted that “taxpayers here shouldn’t have to clean up the mess just because the EU bureaucracy has got involved”. So that’s a non-statement as well.

But there is one significant and refreshingly positive side to the TPA’s rent-a-quote appearance: the Express is now describing them as a “pressure group”, which is accurate and a welcome development. It’s just unfortunate that papers like the Express even bother with the shower that is the TPA.

But it makes for cheap copy. That’ll be another Benchmark of Excellence.
[UPDATE: As with the EU Budget scare at the beginning of the month, the Mail has followed the Express, whereas it is usually the other way round. The Mail article, timestamped after 1300 hours today, pushes the same line as that in the Express, that the UK will be paying millions, while conceding that no extra will be sought from any member state. Clearly no EU scare story can be allowed to go uncopied]
Posted by Tim Fenton at 11:07