Waste collection. All those bins. The controversy over recycling. It generates column inches aplenty, much of it of the why-oh-why variety. And an awful lot of it is complete and utter tosh.

For starters, the assertion by Fat Eric that weekly bin collections were some kind of basic right may have fitted his populist agenda, but like the fictitious “war on Christmas”, was particularly ill-judged. To restore weekly collections would mean finding more than £100 million from somewhere, at a time when local Government is having its finances squeezed.

Then we got the why-oh-why campaign against the number of bins used by some local authorities. This was taken up enthusiastically by the so-called Taxpayers’ Alliance (TPA), identifying a subject on which they could kick local authorities while getting their dubiously sourced copy into the papers.

But, as residents in Cheshire East are discovering, there is no inevitability to “Multiple Bin Syndrome”. In fact, technology is enabling a reduction in the number of different bins needed for recycling, thus blunting the cries from the cheaper end of the Fourth Estate for folks to be allowed to chuck everything in the nearest landfill, if only to give the EU the finger. 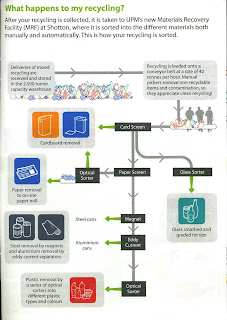 Someone else sorts it for you

As can be seen from this helpful diagram, householders can stuff paper and cardboard, glass, steel and aluminium, and all manner of plastics into one bin. And after that, we can forget having to sort it, because that’s all done on the production line in a big hangar near Shotton.

So recycling need not be a problem. And the more that goes in the recycling bin, the less that has to go to landfill. That’s not just working around potential EU fines – it’s basic common sense.
Posted by Tim Fenton at 18:47

Isn't this what the TPA were supporting? Common sense you say!!

No, the TPA was merely using waste disposal as a means of demonising Government. They made no constructive proposals, and, as their "grassroots" movement doesn't extend to Cheshire, have not picked up on this.