Express Bail-Out From The Facts

As Express proprietor Richard “Dirty” Desmond has asserted under oath that he does not interfere in editorial policy, one can only conclude that the paper’s screaming Europhobia, which has continued unabated despite the recent change in editorship, is not in any way influenced by his presence.

And purely coincidental, no doubt, is the repeated assertion that the UK is effectively single-handedly propping up the rest of the EU, that our money is being routinely filched by “grasping Eurocrats”, and that mere facts matter little, especially when they demonstrate that Des’ hacks are being blatantly dishonest. 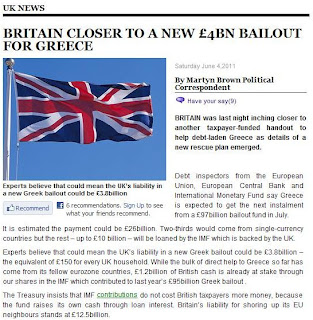 Against this backdrop, then, today’s totally untrue Euro-frightener is wearily predictable: under the by-line of Martyn Brown (maybe Macer Hall is being rested) comes the screaming headline “Britain Closer To A New £4BN Bailout For Greece”.

This trip around the journalistic equivalent of Fantasy Island continues with the blatantly false assertion “Britain was last night inching closer to another taxpayer-funded handout to help debt-laden Greece as details of a new rescue plan emerged”. But there is no “new rescue plan”: the Express article admits this in the next sentence when it talks of the “next instalment”.

So there must have already been at least one instalment, and therefore this plan is not new: thus another side-effect of sending all those sub-editors down the road. And another casualty of the dwindling staff numbers follows directly, with “Experts believe that ... the UK’s liability ... could be £3.8 billion”. This, Express readers are told, is because of the UK’s membership of the International Monetary Fund (IMF).

Let’s put our cards on the table, shall we, Express hacks? There aren’t any “experts”. You haven’t even managed to rope in a single one of the usual talking heads – no-one from the so-called Taxpayers’ Alliance, no Philip Davies, no Douglas Carswell, no Bill Cash, no Daniel Hannan, no Nigel Farage. You’ve just made this up.

How can I be so certain? Because the Express article says so: in the next paragraph, we are told “The Treasury insists that IMF contributions do not cost British taxpayers more money, because the fund raises its own cash through loan interest”. Yes, the Express scare story is just made up – admits the Express.

More fact free and agenda driven drivel? That’ll be another Benchmark of Excellence.
Posted by Tim Fenton at 11:14