Rarely does any newspaper outdo the Daily Express for rabid anti-Europeanism, but today the obedient hackery of the legendarily foul mouthed Paul Dacre did just that, as they actually cribbed an Express Euro-frightener as the basis of a trashy piece that is substantially at variance with reality. 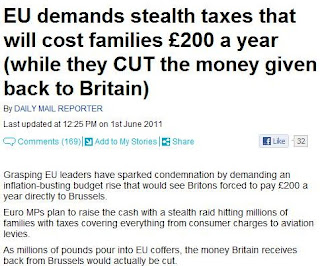 “Grasping EU leaders have sparked condemnation by demanding an inflation-busting budget rise” screams Daily Mail Reporter, possibly thus titled because nobody was shameless enough to put their name to this drivel. EU leaders haven’t yet even discussed the budget, as I demonstrated when considering the Express rant the other day.

But there’s more: “Euro MPs plan to raise the cash ...” manages to avoid the fact that nobody has yet planned to do anything. Likewise “the money Britain receives back from Brussels would actually be cut”, which has just been made up.

The torrent of invention continues, mingling with quotes culled from pieces in the Express and Telegraph, taking in “The budget increase would be funded by direct levies on British people”, although no budget increase has been agreed. And note the “people talking foreign are telling Us Brave Brits what to do” line.

And finally we arrive at “Britain’s £2.6 billion-a-year EU rebate would also be scrapped”, which indicates the clear superiority of the crystal ball provided to the Dacre hackery. And there will be no way out of all this Euro-meddling, as, unlike the Express, no thought can be given to Young Dave teaming up with other EU PMs. 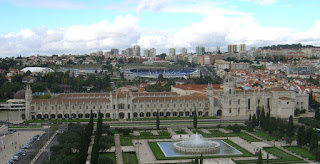 Why not? Because “Britain will have little room for manoeuvring as it is governed by the all-encompassing Lisbon Treaty, signed by Tony Blair, which submitted powers to unelected officials in Brussels”.

And there, the Daily Mail slipped up, and showed just how much research and fact checking gets done at this otherwise well resourced paper.

Because the Lisbon Treaty, which is rather less than “all-encompassing”, was signed by Gordon Brown. Standards in Dacreland do seem to be slipping.
Posted by Tim Fenton at 15:07