The legendarily foul mouthed Paul Dacre and his papers are in the position where, unlike the politicians they routinely rubbish, they do not need to hold to a consistent line on, well, anything. This has been demonstrated this week by their inflating a non-story in order to kick the BBC, then later pretending that a big boy did it and ran away. 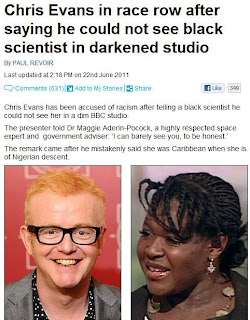 Racism on Wednesday ...
First came the story, which I discussed the other day, of Mail hack Paul Revoir suggesting that Chris Evans had made a racist remark during last Friday’s One Show. He hadn’t: Evans had made a comment about how difficult it was to see guests because of the studio lighting, or lack of it. It was a cheap and ineffective attempt to kick the Beeb – no change there, then. 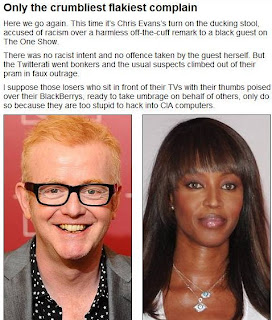 Then in today’s Daily Mail, Fat Dick Littlejohn plays the other side of the story, calling the remark “harmless”, then blaming it on the “Twitterati”, “usual suspects” (yes Dick, like your fellow hack), and “losers who sit in front of their TVs ... ready to take umbrage on behalf of others”, which just about sums up the Mail’s modus operandi all the way back to Sachsgate.

All of which shows, for those who are unaware of the shamelessness and hypocrisy of Paul Dacre and his obedient hackery, just how strong the Daily Mail is on pushing the why-oh-why button, while giving off an equally strong whiff of rank hypocrisy.
Posted by Tim Fenton at 09:54