Anyone looking in on the Express website will be familiar with the diet of stories that started life the previous day with other media outlets: typical of today’s selection is a piece about Princess Eugenie which started life in yesterday’s Telegraph. But now, the desperation of Richard “Dirty” Desmond’s dwindling band of hacks is leading them to crib material from the blogosphere. 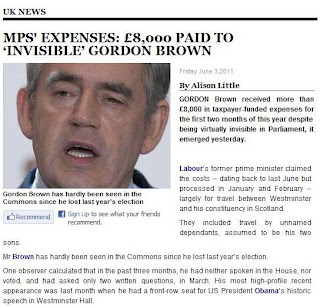 Dated today, and under the by-line of Alison Little, is “MPs’ Expenses: £8,000 Paid To ‘Invisible’ Gordon Brown”, which asserts that Pa Broon has been “virtually invisible” and had “hardly been seen in the Commons since ... last year’s election”. The piece then tells of “One observer” who has “calculated” Brown’s lack of appearance. 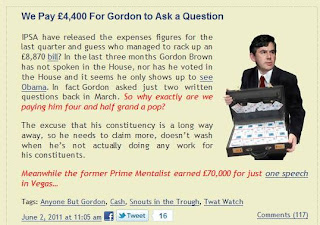 So who is the “One observer”, and where did Des’ finest get their story? Ah well. The story of Brown’s expenses appeared yesterday – the post is timed at just after 1100 hours – in the Guido Fawkes blog, fiefdom of Paul Staines and his tame gofer Henry Cole. I usually have little time for this less than dynamic duo, but fair play to them, they were first to the punch. 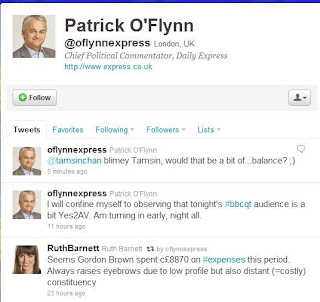 So how did the story come to the attention of the Express? Here, a check of the Twitter feed of the paper’s “Chief Political Commentator” Patrick O’Flynn yields a clue. At around the time the Fawkes blog published its post, Ruth Barnett of Sky News (“first for breaking wind”) tweeted the expense figure. O’Flynn later retweeted Barnett’s tweet, thus acknowledging arrival of the information at Desmond Towers.

Staines and Cole built their story from the Barnett tweet (duly acknowledged), but the rest is, as far as can be told, original. The gist of the Express piece then covers the same ground. I doubt that Des’ finest will have paid anything for the story – O’Flynn has not so far tweeted his thanks – so that’s another example of cheap and nasty hackery from the Express.

Getting stories for free, without acknowledgement? That’ll be another Benchmark of Excellence.
Posted by Tim Fenton at 10:36