A Light Goes Out In Parliament Square

As the UK and USA started to move against the Ba’athist régime in Iraq, one man decided to make his stand: in June 2001, Brian Haw arrived in Parliament Square armed only with his determination to be heard, and a megaphone to carry his message. From that point on, he irritated the life out of many politicians.

Sadly, though, Haw’s campaign took its toll on his health, as a succession of (usually failed) attempts to remove him came and went. The right leaning part of the blogosphere routinely put the boot in: typical is this effort from Iain Dale who refers to Haw as “Hawes” and has allowed a commenter to smear him as “a mentally ill tramp”. 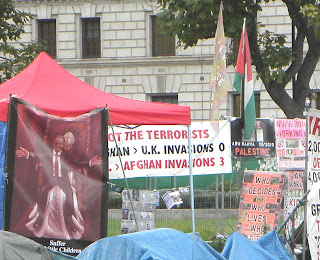 And that is strange (as well as cruel and disrespectful), because the first and most obvious target of Haw’s protest wasn’t a Tory politician, but Tony Blair. The caricature of Tone sitting on the knee of the Pope is at the left of the photo. 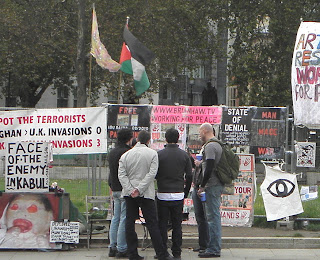 Haw’s camp, seen here in October 2010, had endured for almost a decade when he left for Germany to be treated for lung cancer. It was perhaps inevitable that this would be one fight he would not win.

Brian Haw died yesterday at the age of 62. We will remember him.
Posted by Tim Fenton at 14:01