A Day At The Races

Those of us who have spent any time working and playing in and around the city of Chester know all about Race Days. And we know that, as each Race Day wears on, it becomes more advisable to get away from work as soon as possible, not to stop at any pubs en route to the station, and get the first train home.

This is because racegoers habitually, despite their smart dress, spend the afternoon at the bar – any bar – where they first become Elephant’s Trunk and Mozart, before working themselves into an advanced state of alcoholic derangement. Many merely stagger back up City Road to the station, where those heading for Merseyside face the footbridge challenge, a serious task for the terminally wasted.

More seriously, others come away from the Roodee in fighting mood, and in anticipation of things kicking off in the City Centre, pubs and bars routinely deploy bouncers on the door, and the Police enjoy plenty of overtime. It’s a game played out around racecourses all over the country, so no-one should be surprised.

But the obedient hackery of the legendarily foul mouthed Paul Dacre at the Daily Mail are indeed surprised, nay, shocked at the conduct of some attending yesterday’s races at Royal Ascot. There are drunken brawls! And celebrity escorts! Then there are men and women with tattoos! Oh, the shock of it ... “less distinguished breed of racegoer” ... “fights breaking out” ... “sea of flesh” ... “unsightly tattoos” ... “cheap, tawdry dresses”.

This classic among Mail why-oh-why-fests contains some superbly sniffy lines: “becoming as bawdy as ... Aintree and Cheltenham”, “In a blatant disregard for Ascot’s strict behavioural code, a drunken brawl broke out by a Victorian band stand”, and “a fight on a lawn by a champagne bar just yards from the Royal Mile”. Er, hello, Mail hacks? Where have you been for the past half century?

Race Day, whether it’s at York, Chester or, yes, Ascot, is an excuse for ordinary people to dress up, have a flutter, eat, drink, and be merry, with the option of a good scrap either on the course or on the way home. Appallingly bad behaviour is de rigueur for some. 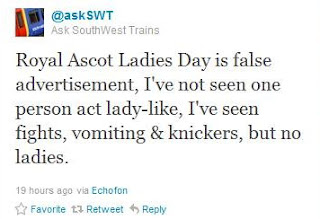 If the Mail hacks had bothered asking, for instance, the person who tweets as @AskSWT, they would learn this in short order, as can be seen. Welcome to the real world.
Posted by Tim Fenton at 17:18