Advertising in the glory days of the Madison Avenue executive was a straightforward business: products were created, brought to market, and promoted through billboards, sales representatives, and particularly radio, TV and film. After all, that was the limit of technology.

But then came selling through home groups: they may have been thought of as cheesy, but Avon and Tupperware parties moved the product, and reinforced the group norm, the idea of belonging. This also cut down on the cost of marketing. Now, that social group has gone online, and so have the admen. 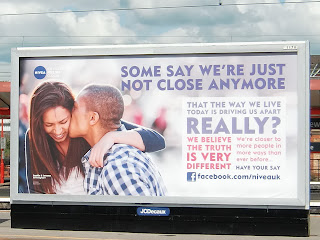 A shambles? Anything but - it guides punters ...

This thought enables the passer-by to understand what looks like a badly laid out billboard with no apparent message: what is being promoted here, what’s the USP, where’s the strapline? The answer is that there is method in this apparent madness, a brand is using the idea of “belonging” as before, and a whole range of product is being promoted.

Some brands have been around for many years: what would become Nivea Creme, sold in the “little blue tin”, first came to market in 1911. Nowadays, the Nivea brand has branched out: there is no way the whole product portfolio could be effectively promoted on one billboard. But by directing prospective punters to Facebook – an environment with which many of the target demographic are comfortable – this problem is solved. 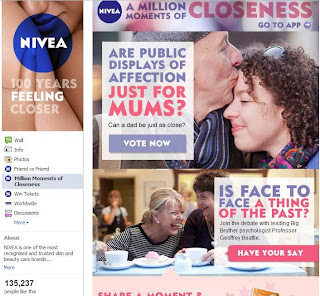 The Nivea campaign is one of several recent examples of “leveraging” Facebook for corporate benefit – using the social networking site to do the heavy lifting of the marketing campaign. The idea is simple: tempt the punter onto the Facebook page, where there are polls, discussions, competitions – and of course some of those slebs that promote the brand.

Plus it goes without saying that there’s an App for that. Is it effective? Well, over 135,000 in the UK “Like” it. Punters can get involved: thus they are drawn in, and the brand is there in mind when they shop, whether in person or online.

It’s come a long way from the days of home selling and Mad Men.
Posted by Tim Fenton at 18:22