[Update at end of post]
Regular visitors to Zelo Street will be familiar with the cheap and nasty nature of the Desmond press: quite apart from the vapid agenda-driven copy, and the routinely appalling punctuation and grammar, papers like the Daily Express and Daily Star all too often feature “news” that has already appeared in rival publications. 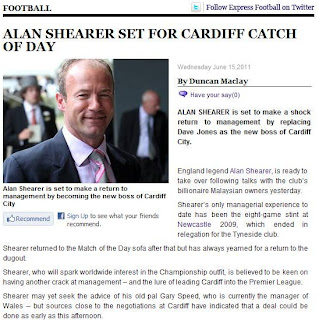 And today, the late copy malaise has spread to the back page: under the by-line of Duncan Maclay, the big news from the world of football is that Alan Shearer is to take over the managerial hot seat at Cardiff City. Shearer was “set to make a shock return”, told Maclay. Moreover, “a deal could be done as early as this afternoon”.

Sad to say, this early call by Richard Desmond’s finest was utterly wrong. As the BBC has reported, Shearer did indeed talk to the new management at Cardiff City, but the result was that there was no result. 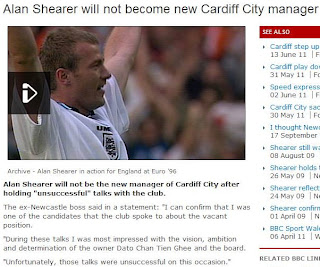 ... er, no he isn't
So Express readers are presented with one version of events from the self-proclaimed “World’s Greatest Newspaper”, while over their tea and toast the TV is telling them the real story. One can sympathise with any of those readers who have concluded that it has not been worth paying good money for the experience.

Clear motivation for readers to look elsewhere for news? That’ll be another Benchmark of Excellence.
[UPDATE: The Express has now updated its story to reflect the reality that existed before most of its readers shelled out for a paper that said something different. By what I'm sure is pure coincidence, the four quotes in the piece attributed to Alan Shearer are, word for word, exactly the same as those in the BBC story, give or take the odd spelling and grammar howler]
Posted by Tim Fenton at 09:17