After all the media bluster about a “sizzling” June, the month has so far been cool and showery, a distinct anticlimax following the warmth of April and a reasonable – and mainly dry – May. Already, the climate change denial lobby is gearing up for telling anyone who will listen that this means the global climate is now cooling.

So why has the weather disappointed? First off, it hasn’t helped that many players from the Fourth Estate have bet their credibility on fringe forecasting outfit Positive Weather Solutions, mainly on the back of their calling the Royal Wedding weather correctly. That was not such a big ask, given that the chance of getting it wrong was 50% at worst.

Moreover, there has once again been a serious misfire in the Atlantic jet stream, although this may reassert itself by the end of the week. In the meantime, a long ridge of high pressure has built, all the way from Greenland southwards, and this has blocked the usual eastwards movement of weather systems – rather as happened last December, when conditions were cold and occasionally snowy. 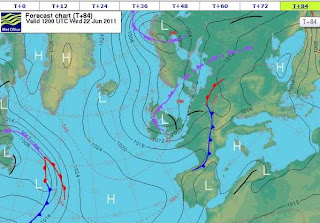 The “blocking” high can be seen on this Met Office forecast chart: the screen shot was taken yesterday and the forecast is for Wednesday (the change with today’s forecast is not significant). As the high pressure area stubbornly blocks weather systems coming out of the eastern USA, conditions in the UK are likely to be cool and wet. The difference from December last is that rain will fall, not snow.

Even so, the highest peaks in Scotland may see a dusting of the white stuff if temperatures drop to around 10 Celsius at sea level, although it is unlikely to stick around. But it must be stressed that this, like the cold snap last December, is a transient weather system, and in itself does not prove or disprove climate change science.

Although that will not stop the usual suspects asserting otherwise.
Posted by Tim Fenton at 16:35