Nowhere can the disconnect between the real world and the pampered, overpaid, uncaring and just plain nasty world of those in the Baby Shard bunker be seen more clearly than when the goons at the Murdoch Sun go after the NHS. The paper’s hacks, pundits and management do not lower themselves to use the service; they all go private. But they need to keep frightening the readers about it. So they must write about it. 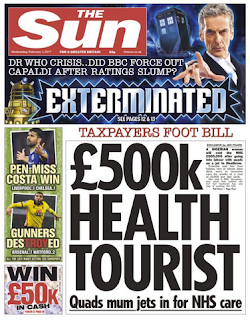 All of which brings us to today’s Sun front page splash, “Taxpayers Foot Bill … £500K Health Tourist … Quads mum jets in for NHS care”. Yes, Sun readers, someone from abroad - and she’s black, just to make the target audience that little bit angrier - has been getting something that all those Ordinary Hardworking Brits haven’t.

But there was, as Captain Blackadder might have said, only one thing wrong with this idea - it was bollocks. For starters, the woman concerned did not leave Nigeria intending to use the NHS. Also - minor point this - long distance air travel has, for decades, been undertaken solely by jet-propelled aircraft. So there is nothing unusual about “jetting in”. Even Sun readers get to do it. It’s just more pejorative drivel.

And something else the Sun isn’t putting on its fraudulent front page “exclusive” claim is that they only found out about this case from a BBC documentary. That would be the same BBC that the Sun spends so much time slagging off, but the same BBC that papers like the Sun use to drive lots of cheap copy about shows like Strictly, Bake-Off, and … oh look, what’s that at the top of the front page? Uninformed Doctor Who speculation!

The article concedes “She had flown to Chicago where she has family to give birth after her gynaecologist warned against having quads in Nigeria … But she was turned away for having the wrong paperwork”. This, though, is fine - in the Murdoch press, criticism of over-zealous US immigration officials is Streng Verboten.

What the goons at the Sun have decided is a much higher priority is to demand that the woman is pursued for every last drop of cash that can be wrung out of her, which today’s editorial makes plain: “NHS failure to make health tourists pay for their care is an outrage – they must be chased for every penny … Cash-strapped hospitals are branded unsafe, yet hundreds of millions of pounds are lost because we do not recoup costs from visitors not entitled to free care”. Who brands them unsafe? Er, guess. The Sun does.

It gets worse: “The NHS is seen as a soft touch worldwide”. By whom? Oh I get it, the Sun makes that one up too. Do go on. “Just ten out of 154 Trusts collect half the national total. Too many don’t bother”. How many more Trusts than ten have money to recoup? Ah, but the Sun isn’t going to tell you that, either. Nor the actual cost to the average taxpayer.

So what is the cost of the Nigerian woman’s treatment, and that of her surviving babies? Wonder why the Sun hasn’t included it in its story? Wonder no longer: the cost to each and every taxpayer of that treatment is around ONE PENNY. The Murdoch goons are working their readers up into a lather of hatred for ONE PENNY per taxpayer.

Right, says he rummaging in his pocket, there’s my ONE PENNY. And two … fingers in the direction of the Baby Shard bunker, sponging off the BBC (I paid my licence fee - did you, Rupe?) while accusing others of sponging. Remember folks - don’t buy the Sun.
Posted by Tim Fenton at 10:20

So basically she tried to get care in Trumpland, got turned away and then got stuck in UK almost by accident. So it's a story of US attitudes to care and compassion. Did anyone else see the Panorama episode on Monday where the Californian family brought the elderly father with dementia to Hereford and abandoned him to be supported by the UK tax payers? Did the Sun report it?? Probably not, afterall he was white and it was a BBC investigation.

This woman will be paying, no matter what the Sun and Mail say. The NHS might turn a blind eye to course of antibiotics or some stitches but you never going to get away with giving birth to quads!!

Note too the difference in Fake News Headlines between yesterday and today.

Yesterday, bank thieves who stole millions were "bonk robbers" - oh those fun loving lads having a bit of fun with the girls, robbing from everybody to give to......well, themselves, actually. Just the way blokes are innit? Not like those blacks who come here, taking our jobs, raping our women, robbing the NHS is it?

Last night the dear old "liberal" TV had someone on to defend Dirty Dacre's dissing of "Call Me Dave" Cameron. Guess who said Dirty is "a great man"?......You'll never guess.....Oh OK, it was Trevor "Creepy" Kavanagh of the Scum! Now why should I be suspicious ol' Creepy might be angling for a job?

And just think - there are some people who actually believe all that Daily Fake News bullshit. Gives a whole new dimension to the old NYT claim to provide "All the news that is fit to print." In the Scum's case, replace "f" with "sh" and it would be appropriate.

Do you ever doubt that your fellow citizens are full of raw hatred, bigotry and borderline psychopathy? Read the comments here. I found it a shocker. http://bit.ly/2kgoRPL

Just seen a trailer for the BBC programme, clearly confirms that she was returning home to Nigeria from Chicago via London when she went into premature labour. Not helped by over 2 days of continuous travel. Two of the four babies have already died, that should get the champagne corks popping at the Sun!

Would have thought Murdoch loves the health tourism. It gives money to his friends in big pharma.

Disgusting lies from the Sun, as usual- that front page works so well in showing their utter hypocrisy and contempt for others.

A very minor point, but they couldn't even be bothered to use the current TARDIS in the Who image!

The intellectual and moral laziness of the Scum seems to be printed on every single particle of the paper.

Thank you so much for saying this, and filling in some of the details I didn't know.

What I found horrendous was the way the Sun was literally counting the cost of putting babies in intensive care and then beasting a grieving mother. It's a reminder that some of the most despicable things the tabloid press do are entirely legal.