The tendency of those in the Northcliffe House bunker to run EU-bashing scare stories without checking them properly may result in cheap copy, and keep the readers in that frightened and ignorant state which the right-leaning press needs in order to remain credible, but it has a tendency to come untuck when purveyors of real investigative journalism expose their chicanery for the sham it is. 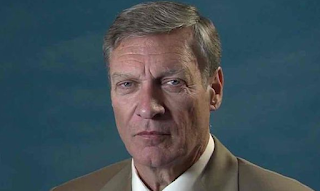 This fate has befallen all those at the Mail who put their faith in one “Professor” Ted Malloch, who is believed to be the preferred choice of Combover Crybaby Donald Trump for the vacant post of US Ambassador to the EU. It is not giving away any secrets to say that Malloch is anti-EU and anti-Euro, to the extent that he is more than happy to talk up the potential failure of both. Thus the Mail was naturally attracted to him. 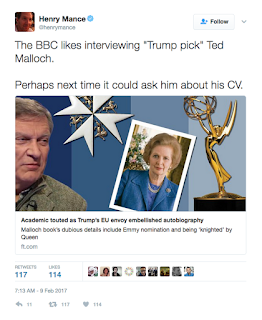 So it came to pass that Mail Online readers were treated to stories such as “'America can be Britain's rich uncle': Strident Brexiteer tipped as leading candidate to become Donald Trump's ambassador to the EU promises 'game-changing' US-UK trade deal”, and more recently “The euro 'could collapse within 18 months', says the man tipped to be Donald Trump's ambassador to the EU”. And then came the Greek frightener. 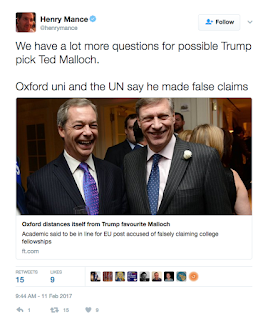 “Greece is set to ditch the Euro in favour of US dollar in devastating move which would 'freak out' Germany and humiliate EU, claims Trump's pick for Brussels envoy” screamed the headline, with the article claiming “Malloch claimed senior Greek economists are looking into taking on the American banknotes if the country turns its back on the European currency … Due to Greece's crippling financial crisis, officials are said to be desperately searching for an alternative to the Eurozone, which would 'freak out' Angela Merkel, according to Malloch”. But then a problem entered. 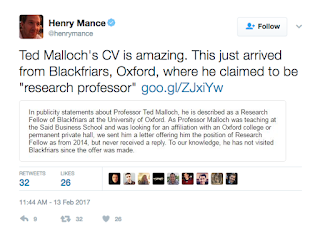 The FT was on Malloch’s case. Quite apart from all the other stories about Greece leaving the EU and/or exiting the Eurozone being exposed as worthless speculation, the source for the Mail’s EU-bashing had, it seems, been economical with the actualité when it came to some of the claims made on his CV (pace Paul Nuttall). 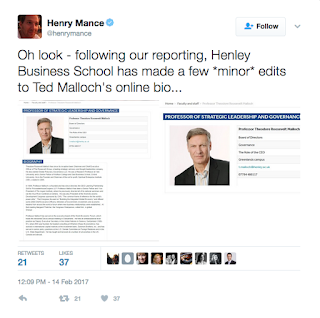 The FT’s Henry Mance, after observing “The BBC likes interviewing ‘Trump pick’ Ted Malloch. Perhaps next time it could ask him about his CV”, noted dubious claims of Emmy nomination and a knighthood. Then, accompanying a photo of Malloch and serial liar Nigel “Thirsty” Farage, Mance also noted “Oxford uni and the UN say he made false claims”. Malloch also claimed to be a “research professor” at Blackfriars, Oxford. He isn’t. 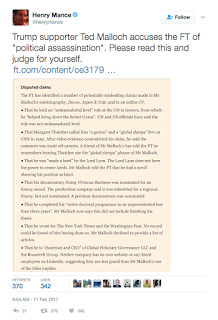 It got worse: the Henley Business School pulled its bio of Malloch following the FT’s investigation. Meanwhile, Mance simply told “Trump supporter Ted Malloch accuses the FT of ‘political assassination’. Please read this and judge for yourself”. The Mail is not the only media outlet to take Malloch on trust: predictably, the rabidly Europhobic Express has lapped up his every utterance. And it’s a complete fraud from start to finish.

Even Tim Worstall at Forbes has said the idea of Greece switching to the US Dollar is ridiculous - for one, monetary policy would be more, not less, strict. This is another example of an otherwise ignorant media running stories that look too good to be true - and then discovering, too late, that they are indeed too good to be true. Well done the FT.
Posted by Tim Fenton at 12:48

I don't why you lot are so skeptical about Brexit. Surely anyone can see sense in leaving a market of 500 million consumers for possible market of 300 million. Oh err..

How times have changed since one Lyndon Baines Johnson (POTUS 1963-68) told the Greek prime minister, "Fuck you and your constitution"......oddly coincident with the rule of fascist colonels in Athens.

Those Yanks ey......bringing democracy everywhere......not bombing, invading or drone murdering anybody or destabilising governments that try to be independent.

The United States of Amnesia and gun mass murders. Land of the Fee. Home of the slave. A suitable place for Malloch and all the other ranting righties. A nation John Freeman typified as having "Mortgaged their souls to psychiatrists." Problem is, it's a mortgage that will never be repaid.

He really is a Knight of The Order of St John, he would have been invested by The Duke of Gloucester and not entitled to be called "Sir".