It Girl Dead - Press Piles In

For the past quarter century, the tabloid press has always had one source of genuine celebrity copy, from one person who was famous for being famous, knew everyone, mixed with Royalty, had everything, was seen at all the right places, and now has passed away. Tara Palmer Tomkinson was found in her Kensington apartment yesterday and pronounced dead soon afterwards. She was just 45 years old. 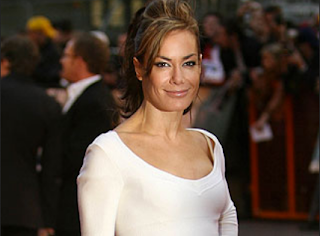 So far, so tragic: someone who had it all, but became, by all accounts, increasingly unhappy and lonely, dogged by increasingly poor health and the legacy of a cocaine habit that verged on the truly heroic. But for the press, this was yet worse: a source of goss cut off, never to return. There was only one thing for the tabloids to do - make some money off of her before there was nothing more than memories left. 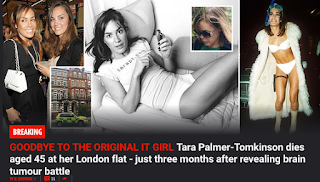 As usual, this meant the Sun and Mail leading the pack in the efforts to flog a few more copies off the back of Ms Palmer Tomkinson’s death. This meant digging out lots of Phwoar! inducing photos from her past to produce the kind of “Look readers, she’s hot and she’s dead” schtick that got the Super Soaraway Currant Bun into such hot water when the Murdoch goons pulled the same stunt with Reeva Steenkamp. 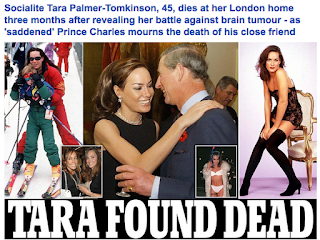 This resulted in the Sun announcing “Goodbye To The Original It Girl”, with the Mail also running plenty of photos of a scantily attired Ms Palmer Tomkinson with the more direct headline “TARA FOUND DEAD”. That was tasteless enough, but then came the demand for new angles to fill this morning’s papers. And while the Mail simply told readers of “Charles’s grief for the It-girl no one could save”, the Sun went one better. 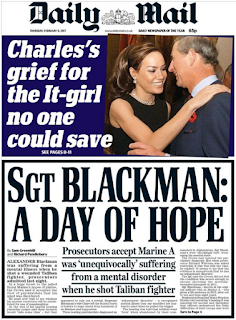 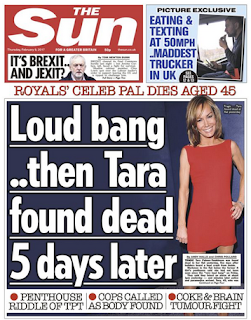 Thus the potential source for more speculation, and more cheap copy: Ms Palmer Tomkinson had been diagnosed with a brain tumour, but it was not malignant, raising the possibility that it was not that that killed her. The press is now realising this. It’s also revealing that she was not thought newsworthy enough for them to be fussed about a further potentially fatal condition. Until yesterday. 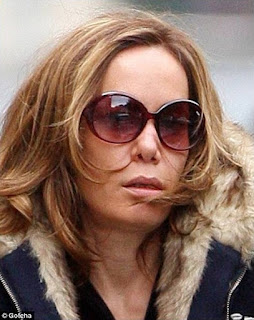 What the Sun, to its credit, admits, but leaves to the end of its report, is that despite all the money, Ms Palmer Tomkinson regretted the OTT lifestyle in which she had indulged for perhaps too long: “I’d love to lie and say I have no regrets, but I do … I’d like to go back to that young girl and shake her. So much was handed to me on a plate”.

All that wealth and attention does not bring happiness. But it does help the press to flog their product to a Sleb-obsessed readership. Farewell, Tara Palmer Tomkinson.
Posted by Tim Fenton at 10:31

Plainly, the poor woman DIDN'T "have it all." Nor is there anything "heroic" in shoving cocaine into your body.

Meanwhile, the Heil and the Scum behaved as they always do - like rabid rats in a pit. Disgusting, cowardly people.

Correction for the benefit of any passing S*n 'journalists': TPT was not the original It Girl; that accolade belongs to the late Clara Bow who gained the title after starring in the silent romantic comedy film It in 1927.

They were even wrong in calling her the

They were even wrong to call her the "original" It Girl. The real Original It Girl was Clara Bow.