As if the furore over Tory minister David Davis’ behaviour towards Labour MP Diane Abbott had not engulfed enough of the Pundit Establishment, yesterday brought a singularly ill-advised intervention from serial Murdoch shilling taker Iain Martin, whom Zelo Street regulars will have last observed very slowly and deliberately telling the audience of The Andy Marr Show (tm) why the Keith Vaz rent boy story was in the public interest. 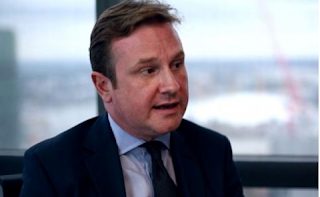 Martin has now decided to pass judgment on the incident in the Commons’ Strangers Bar last Wednesday. After Owen Jones had responded to Liam Young’s assertion that, in any other walk of life, Davis would have faced the sack for his behaviour, by agreeing “So many attacks on Diane Abbott are just sexism and racism, not about disagreeing with her, and it is actually disgusting”, Martin needlessly jumped in with both feet. 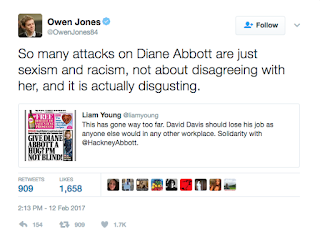 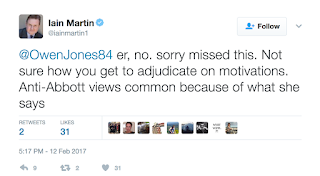 “Not sure how you get to adjudicate on motivations. Anti-Abbott views common because of what she says” he pontificated. Jones was unimpressed: “Iain, even the Mail could bring themselves to label her treatment 'sexist' and that kind of treatment isn't meted out to others”. The Great Man declared that Jones should Look Over There: “MoS. But curious as to how u know motivations of those who criticise DA. Might it be that she's useless + apologist for Mao etc”. This totally failed to address Young’s and Jones’ points. 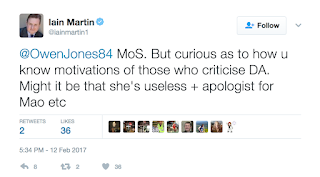 So Jones tried again: “Why are you trying to distract attention from the sexism and racism against Diane Abbott which anti-Corbyn MPs have denounced?” It is true that Labour MPs from across the party had denounced Davis. Then Martin dropped his clanger: “Corbynistas helped destroy the Labour party. Now ruined Labour reduced to ridiculous grievance-seeking of no concern to voters”. It was only grievance-seeking! 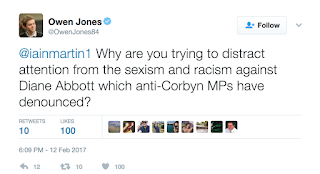 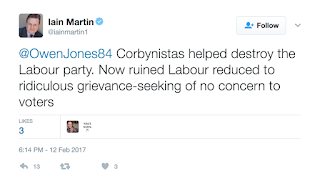 Owen Jones had seen enough: “‘Ridiculous grievance seeking’ is how this Times hack describes opposing Tory councillors tweeting pics of black women as apes with lipstick”. Ayesha Hazarika, no fan of the current Labour leadership, tried to put Martin straight: “Labour is being destroyed by JC & co but must not use that to deny sexism and racism that @HackneyAbbott gets”. It was about sexism and racism. Did Martin now get that? 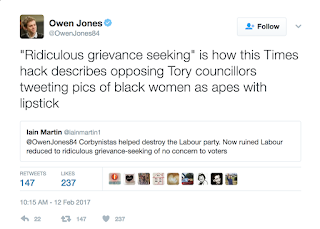 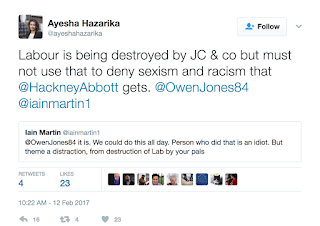 As if you need to ask. “Began with Owen claiming to know motives of ‘so many’ who criticise DA, when he simply cannot know”. So no, he didn’t. And by now, the exasperation of some observers was coming to the surface. Ellie Mae O’Hagan asked simply “what is wrong with you? Why is defending this kind of sexist shit the hill you're choosing to die on?” She was not alone in her endeavour. 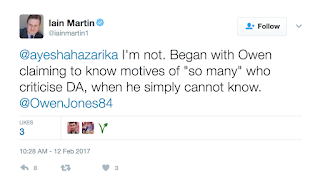 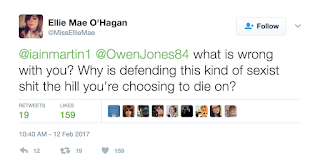 Abi Wilkinson, marshalling the combination of rigour, subtlety and finesse for which she is becoming renowned, put very directly her response to Martin’s whataboutery on the motivations of those who routinely abuse Ms Abbott: “like it's difficult to interpret comments about whether she's fuckable and racist slurs”. The case rests right there. 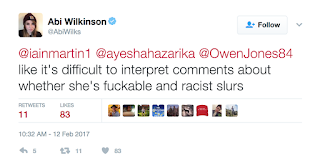 Diane Abbott has been subjected to not just unforgivably bad behaviour from a fellow MP who should know better, she has also been on the receiving end of an appalling amount of blatant racism. This has nothing at all to do with Jeremy Corbyn, or what Ms Abbott says about issue A, B or Z. It’s bang out of order and indefensible. Say sorry, Iain.
Posted by Tim Fenton at 13:14

But the New Labour gang damn near managed it by grovelling to the Yanks, mass murder warmongering, Murdoch/Rothermere and the far right economic establishment. Quite apart from abandoning every humanist principle the party once had.

If the Labour Party is ever destroyed it will be a direct result of the miserable barrow boy cowardice and war criminality of New Labour. All of that happened years before Jeremy Corbyn showed up on the leadership stage. Though doubtless political traitors like Hilary "Bomber" Benn, Jack Straw, Alan Milburn, Tony "50K a lecture" Blair, Gordon Brown and all the other gobshites would like to see the truth disappear down the fake news memory hole.

Meantime, mainstream media will continue to manufacture slanted coverage of the Abbott saga while the New Labour faction try to use it for their own advantage.

It certainly helps divert attention away from the disgusting tory termination of help for child refugees.

I'm never usually shocked by Twitter but Iain Martin shocked me. So much hate and prejudice.

It's funny how the language, attitudes and aggression of the vulgarian Trump and his near-fascist advisors is increasingly being adopted by the suave, gentlemanly and urbane members of our much more elevated right wing press and politicians.
I wonder why that is.

Thanks for sharing that picture of Iain Martin, Tim. He's gorgeous!