The Murdoch goons at the Super Soaraway Currant Bun are in full mock horror mode this morning at they announce to the world “Killer Exclusive … American strangler dumped on Britain”. Who he? Well, Dempsey Hawkins, who is 57, has spent 38 years in prison in New York State for murdering his then girlfriend, and has been released on condition that he gets deported. He is British, and so has been deported to the UK. 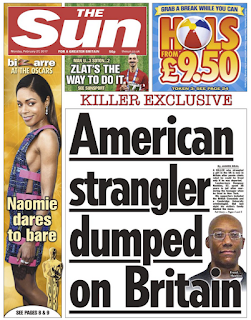 Here, he has worked to rebuild his life with the help of friends, got himself a job and somewhere to live, and is a generally productive member of the community. But that’s not good enough for the Murdoch mafiosi, who have readers to frighten and papers to sell. “‘HE'LL KILL AGAIN’ … Killer who strangled girl in US now in UK after Brit campaigners fought for his deportation … Murderer Dempsey Hawkins denied parole nine times since being jailed for murder of his 14-year-old girlfriend in 1970s” they howl.

Do go on. “When he was 16 he strangled his 14-year-old girlfriend Susan Jacobson with a shirt and stuffed her body in an oil drum … He then pretended to help searchers look for her while keeping them from finding her … retired NYPD cop Mark Corrao added: ‘This man has been dumped on you people. The family feel powerless. Everyone in the UK should be alerted and know what happened’”. But, er, hang on a minute.

Deporting criminals? Where did I hear that before? Was it … no, surely it couldn’t have been … yes, I think it was … wasn’t it … rings a bell … of course, it was in that well-known paper … what’s it called … y’know, I do believe it’s called … THE SUN!

Deporting criminals is a Sun speciality - so long as it’s the UK deporting them, or as they are saying today, dumping them - somewhere else, preferably somewhere full of brown or black people or, failing that, somewhere they speak foreign. “Moroccan criminal who cannot be deported identified as Abu Hamza’s ‘daughter-in-law’ … Tory MP Philip Davies outed her using parliamentary privilege” was a typical example.

There was more. We’ve been told of “Deport delays for hundreds of European criminals being hosted in UK … Brexit MP says figures show the 'system is broken’”. Then there was “ALMOST 1,800 foreign criminals who should have been deported are still here five years after being freed from jail”. Or how about “NEARLY 6,000 foreign criminals waiting to be kicked out of Britain are freely roaming the streets, official figures reveal”?

Or this variation: “THOUSANDS of foreign offenders could be escaping deportation each year because police officers are failing to check their immigration status”. And don’t forget the Poles: “AT LEAST 130 Polish criminals serving time in UK jails should have been sent home over the past four years – red-faced officials admitted”. Yeah, who do they think they are, getting above their station by doing cheap plumbing for us?

The Sun is fine with deporting criminals - so long as it’s somewhere outside the UK they get dumped. So that’s the usual stinking hypocrisy from the Baby Shard bunker, then.
Posted by Tim Fenton at 10:01

The Sun in La La land or has it been eclipsed by Moonlight?

They seem a bit confused.

And of course the man is black.

Always guaranteed to have Scum Nazis engage in propaganda onanism.

Surely the dodgy character Dirty Digger who presided over what has been described a "Mafia like organisation" during the criminal Hacking inquiry should be deported.

Not likely with his (ex) minions firmly ensconced in No 10. We can't control all our gangsters operating in the City let alone the foreign ones!