As if there were not enough controversy in the UK to attract the attention of the assembled punditerati, the focus has suddenly and briefly shifted to the USA and the continuing attempts at self-promotion by deeply repellant man-baby Milo Yiannopoulos, backed up by the motley convocation of the irredeemably batshit that is Breitbart - and his friendship with (thankfully) former Tory MP Louise Mensch. 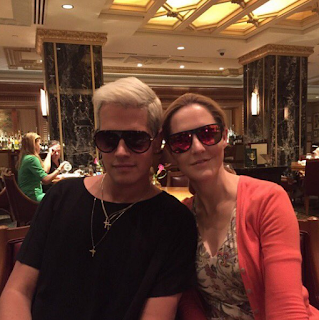 Ms Mensch has made some singularly unfortunate friendship choices in the past; she was at one time also on good terms with Yiannopoulos’ fellow batshit Breitbarter, Raheem “call me Ray” Kassam, another self-promotion artist of no discernible talent. But Kassam’s only sin was to join the UKIP bandwagon, while Yiannopoulos, who was to have been a keynote speaker at CPAC this year, has vocally advocated for paedophilia. 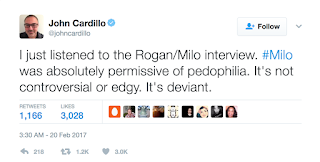 After talking about older men having sexual relationships with “young boys”, he asserted “You’re misunderstanding what paedophilia means! Paedophilia is not a sexual attraction to somebody 13 years old who is sexually mature”. Many - including me - had warned repeatedly that Yiannopoulos was someone to be avoided, and for a whole host of reasons. Now, the realisation hit home elsewhere. 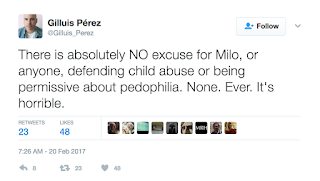 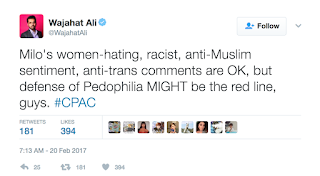 John Cardillo, who calls himself “Right of Reagan”, observed “I just listened to the Rogan/Milo interview. #Milo was absolutely permissive of pedophilia. It's not controversial or edgy. It's deviant”. Yasher, who contributes to New York Magazine, noted “AUDIO: Milo Yiannopoulos advocating for pedophilia in an interview. He's the keynote at @CPAC and he has a book deal with @simonschuster”. Gillius Pérez said simply “There is absolutely NO excuse for Milo, or anyone, defending child abuse or being permissive about pedophilia. None. Ever. It's horrible”. And there was more. 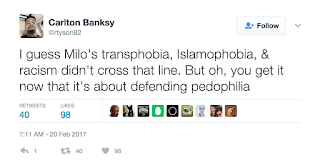 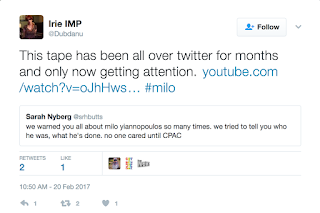 Wajahat Ali aimed his comments directly at the Right: “Milo's women-hating, racist, anti-Muslim sentiment, anti-trans comments are OK, but defense of Pedophilia MIGHT be the red line, guys. #CPAC”. Carlton Banksy followed up with “I guess Milo's transphobia, Islamophobia, & racism didn't cross that line. But oh, you get it now that it's about defending pedophilia”. The Tweeter otherwise known as Irie, echoing Sarah Nyberg, warned that audio evidence of Yiannopoulos’ stance had been there for months. 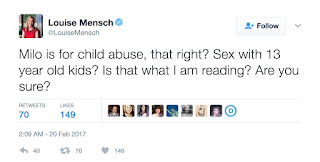 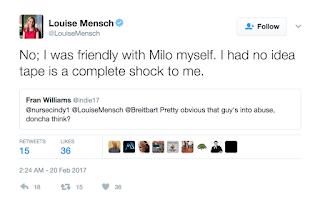 So what of Ms Mensch, who had so willingly cosied up to Yiannopoulos in the name of supporting free speech, the excuse for his repellant beliefs? At first she was sceptical: “Milo is for child abuse, that right? Sex with 13 year old kids? Is that what I am reading? Are you sure?” Then the penny began to drop: “I was friendly with Milo myself. I had no idea tape is a complete shock to me”. And then came the repenting at leisure. 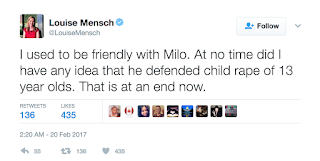 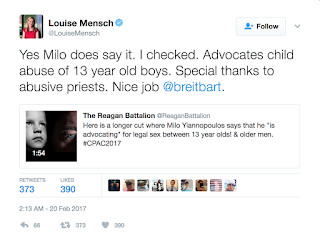 “I used to be friendly with Milo. At no time did I have any idea that he defended child rape of 13 year olds. That is at an end now … Yes Milo does say it. I checked. Advocates child abuse of 13 year old boys. Special thanks to abusive priests. Nice job @breitbart”.

She was warned. But it has taken Yiannopoulos spelling it out, on tape, for Louise Mensch to understand that befriending this bag of sub-human filth was Not A Very Good Idea.

And remember folks, they allowed her to become a Tory MP. Be afraid. Be very afraid.
Posted by Tim Fenton at 12:18

Crypto-fascists with a penchant for young boys! Who'd ever have thought it?

"...irredeemably batshit..." doesn't even begin to describe my opinion of Yianopopopopoulus or UnterMensch.

But if anybody thinks Mensch's departure from Parliament has rescued the tories from Harridans Inc - try listening to Soubry or Truss or McVey. Christ, it's like being next to a Springer Spaniel after it's been forced to quaff a gallon of Turkish coffee.

And, of course, Mensch's rock manager husband was instrumental in the career of sadistic paedophile Ian Watkins, former lead singer of Lostprophets. To unwittingly support one paedophile apologist might be seen as unfortunate...

And don't forget her former business partner Luke Bozier, who was found guilty of viewing images of child abuse. She was totally shocked and surprised by that bit of peaodophilia as well if I remember correctly. Maybe she needs to start being a bit more selective of her social networking.

IT is fun to watch the fer right tripping over themselves as they proclaim their rights to "free speech" - but anything they don't want heard is "fake news" ........

The ghastly Milo is backpedaling at a furious pace claiming '17' yr old boys not '13'and so on so not quite the outspoken renegade he wishes us to think he is. He was bound to implode at some stage as his party trick is nothing new and about as old hat as the cheap pearls he wore on the Jerry Springer style Bill Maher show who must also now be regretting his choice of guest,
So that's one "Alt Right"/ Neo-Nazi to bite the dust so hopefully it's a trend. Wondering how the always serious Brendan O'Neill will spin this on Spooked.

Most likely re-run the old Beckett/Harman/PIE in the early 1980s stuff, with "Why weren't the left more vocal about child abuse back then?".

Hahahaha Andy. You must have seen the tw8tterings on twitter... a veritable excrementfest of "but PIE" look over there squirrelling memes.

Also worth noting that Mensch ganged up to attack a minor on Twitter with a conman, Matthew Brown, who pretended to be Mervyn Barrett QC.

Whether Mensch thought it was Barrett or Brown is questionable - from the content of the account, people who knew him said it was pretty clear it wasn't Barrett. It appeared on these pages before as well - a prior "menshn" in the comments here: