The tsunami of Fake News claiming to come out of Sweden, and by sheer coincidence timed to follow directly from the recent outburst by Combover Crybaby Donald Trump, has already featured on Zelo Street, as the contribution of Battersea basement dweller Paul Watson was considered. Watson is not actually on the ground there in Sweden. But he knows a propagandist who says he is: step forward “Peter Sweden”. 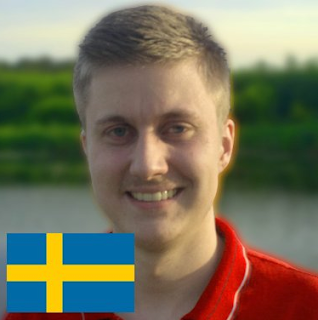 A real Swedish source - or maybe not

Peter Sweden, or whatever his real name and location is, makes this claim in his Twitter bio: “Swedish photographer. Reporting on news from Sweden. Political commentator. Your go-to source for news from Sweden that the MSM won't report”. How very convenient for all those Alt-Right ranters - a real Swedish source! Or maybe not: he also claims to be in “Europe - Not the EU”. Sweden is an EU member state. I’ll just leave that one there.

He is also clearly working closely with Watson and the rest of the Muslim misinformation machine, as witness his faux shock at Tim Pool - the journalist paid via Watson to go to Sweden - claiming “a local Muslim in Sweden says he believes 20-30% of Muslims here support ISIS”. He then reinterprets even this: “In the video the guy that is being interviewed says that 80% of the refugees from Syria that has arrived in Sweden support isis”. 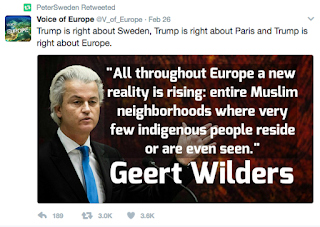 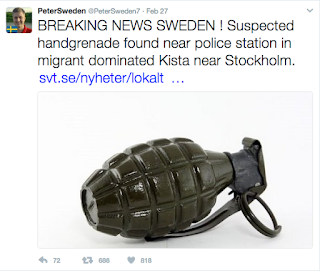 Note the lack of any reliable sampling or methodology: that is not the point. The point is to get the misinformation and invention out there for the rest of the Alt-Right shock jocks to feed off. Peter Sweden also Retweets Voice of Europe, a Fake News feed that endorses the likes of neo-Nazi Geert Wilders. But back to his own “product”.

“Suspected handgrenade found near police station in migrant dominated Kista near Stockholm” he proclaimed. Did it look like that one? He doesn’t know. That isn’t the point. Once he’s pulled the deception trick, he’s away: “Once again i cannot state this enough. THIS IS A HANDGRENADE !!! A military grade weapon. Let that sink in”. And then he just makes it up: “A new report says that grenade attacks in Sweden increased with 170% from 2015 to 2016”. Citation? Link? You jest. The Alt-Right doesn’t dwell on such trivia. 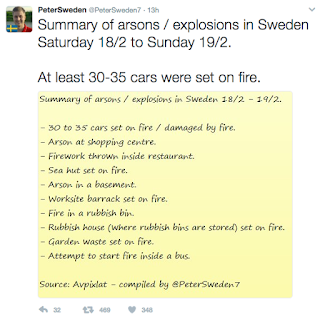 Instead, after pausing to give his approval to Voice of Europe spinning for Marine le Pen, Peter Sweden is propagandising about arson: “Summary of arsons / explosions in Sweden Saturday 18/2 to Sunday 19/2. At least 30-35 cars were set on fire”. His source is Avpixlat. Wikipedia describes the site as “a Swedish online magazine with close ties to the anti-immigrant Sweden Democrats … The site has been labeled a racist hate-site”.

This does not concern Peter Sweden, who moves swiftly on to endorsing comments like “European rape capital #Sweden has now achieved 100% rape increase in the past 3 years. @realDonaldTrump right again” (not even slightly close to the truth) and appealing to authority with “Regarding Kista. It is a well known multicultural suburb. I've been at Kista shopping centre many times and i can confirm that it is”. But has he?

Peter Sweden claims to be a photographer, but appears not to include any original content. He claims to report from Sweden, but could be posting his garbage from anywhere. All we can say with any reliability is that he is yet another element in the falsehood and misinformation machine intended to cloud reality and prevent reasoned and rational discourse. So he’s just another Fake News troll, then.
Posted by Tim Fenton at 12:31

But Mr Sweden (let's call him Yellow and Blue Peter) hasn't mentioned the obvious: Sweden's 600% increase (year on year) in rapes, grenade atrocities, un-Nordic urban dog-poo incidents and tactical nuclear weapons attacks only started to increase when Trump got in and, like the FBI leaks, the 4.5 million world-wide women's marches and the sacking of Claudio Ranieri, are clearly being orchestrated by Barack Obama.

Wake Up Europe! Keep Ikea Flat-packed! No to halal meatballs!

Most photographers I come across on social media tend to post examples of their work on their social media accounts. Peter Sweden's Twitter feed is mostly free of such content... or is he one of those "photographers" that always forget to put a memory card in their cameras?

Is an Alamy stock photo;

My money is on him living in Munich (for the benefit of Kippers, that's in Germany). Can't quite get enough evidence for the moment and I HAVE to go out!!

For someone in Sweden, they tweet primarily from 14:00 to 02:00. Not impossible, but fits well with US daytime. They also have their timezone set to "Pacific Time (US & Canada)".
21,802 tweets in less than a year is quite an achievement too.
https://foller.me/petersweden7

Master R. Ace, you got it wrong.

Clearly Putin's to blame. He's to blame for everything else. The bastard.

It's either him or that well know rapist Julian Assange.

Hmm, Anon.
I'm not sure that it would be on Mr Sweden or Herr Drumpf's script to blame Putin, would it? Aren't Putin and Drumpf quite close or is that just a rumour put about by the FBI, the CIA, MI5/6, the liberal-elite-failing-metropolitan-bubble-very very overrated-faggot-libtard-cuck -snowflake-mainstream media. And Gary Linneker?


It's a job to know what to think these days, isn't it?