Since the deeply unpleasant Tony Gallagher was recruited by the Murdoch mafiosi to occupy the editor’s chair at the Super Soaraway Currant Bun, the paper has managed to bust the Editor’s Code of sham press regulator IPSO on several occasions, including the infamous “QUEEN BACKS BREXIT” front page which had nothing to do with the gossip generated by Michael “Oiky” Gove, honestly. 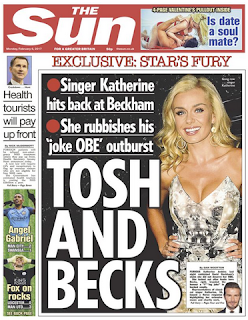 And today brings yet another example of the genre, as the Sun’s front page headline is clearly not backed up by the article that supports it - or, in this case, doesn’t. The paper has returned to its attack on former footballer David Beckham, in an attempt to both flog a few more papers off the back of hacked emails, and put the boot in on someone to show the world that nobody is too big for the Murdoch goons to take down.

The offending headline, as so often with the Sun, does not concern itself with subtlety: “Exclusive: Star’s Fury … Singer Katherine hits back at Beckham … She rubbishes his ‘joke OBE’ outburst … TOSH AND BECKS” it reads, with Dan Wootton’s article claiming “FURIOUS Katherine Jenkins last night rubbished David Beckham’s claim that she did not deserve her OBE. She lashed out after footie hero Becks, right, branded the honour a ‘f***ing joke’ in hacked emails”. At least they got the “hacked emails” right.

So what has Ms Jenkins actually said? Well, what she has actually put on the record is, er, nothing. She doesn’t “hit back at Beckham”. She doesn’t “rubbish” anything. She didn’t “lash out”. We know this because, when it gets to the supporting article, the Sun effectively admits that Ms Jenkins did not tell them anything.

And as for the sub-heading in the online edition claiming “Classical beauty reeled off a list of her charity achievements and slams Beckham's criticism after we reveal legend's rant”, no, she didn’t reel off any lists. Moreover, the claim “Welsh star Katherine, 36, defended her right to the award in the 2014 New Year Honours” misses the mildly inconvenient fact that Ms Jenkins did not defend anything to the Sun.

Even the claim “Representatives of classical singer Katherine, 36, issued a fierce response highlighting her extensive music and charity work” is wrong - because only one representative has spoken to the paper. We know this as the Murdoch goons then admit “Her manager, Professor Jonathan Shalit, told The Sun: ‘Beckham says, “Katherine Jenkins OBE for what? Singing at the rugby and going to see the troops plus taking coke. F***ing joke” … I say Katherine was awarded an OBE  for her services to music and charity’”. HE SAYS. Not Ms Jenkins. The Sun has misled its readers - again.

So that’s another breach of Clause 1: Accuracy. Will the Sun ‘fess up? Nope. Will IPSO do anything about it? Not a chance. Will the rodent-like Gallagher be reprimanded? You jest - he’ll be awarded a pay rise first.

The Sun is today yelling it has an EXCLUSIVE (from yesterday) that disgraced MP Simon Danczuk is planning to marry his latest victim sorry loving partner Charlene Meade in the Crypt in December. That would be wife number three.

Only problem is the Mail on Sunday had the story on 22 February.

So, not much of a Sun exclusive is it?

I note the Daily Mail is also running "bigly" with this story, even recruiting the repellent Ms Moir to Mr Dacre's surrogacy of his anger at not getting his knighthood ......

22 February til now? That's almost a year! It truly must be love.