The deeply paranoid state of the new administration in the White House was once again highlighted this week by the continuing use of the Third Reich playbook to attack media outlets whose reporting incurs the displeasure of Combover Crybaby Donald Trump. Where the Nazis attacked the “Lugenpresse”, any outlet Trump dislikes is now attacked as “Fake News”, and more recently “Enemies of the American people”. 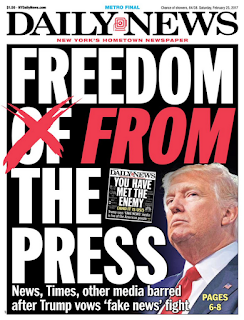 So far, so disquieting, especially given the presence of those like Steve Bannon, formerly of the convocation of the irredeemably batshit otherwise known as Breitbart and believed to be the real power behind The Donald, but now the real censorship has started, with media organisations incurring Trump’s disfavour being barred from White House press briefings, which themselves are being taken away from the cameras.

Think about that for a moment. A great constant, no matter whose candidate occupied the Presidency of the USA, has been the visible and regular briefing of the press. Journalists have been free to question not only the President’s press officers, but the incumbent himself. Now, the Trump gang is cutting back on letting the President face questioning, and on top of that, shutting out many media organisations. 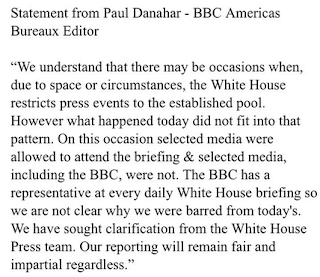 Who has fallen out of favour? Well, this is where it gets really worrying: the New York Times, CNN, the Guardian, the New York Daily News, Politico, BuzzFeed and even the Daily Mail (remember the Melania Trump lawsuit? You can bet the President does) have been excluded. And … the BBC. But Breitbart, the conservative Washington Times, and Fox News Channel (fair and balanced my arse) have been allowed in.

Meanwhile, Trump has addressed the annual gathering of the right wing at CPAC, telling them “As you saw throughout the entire campaign, and even now, the fake news doesn’t tell the truth … I say it doesn’t represent the people, it never will represent the people, and we’re going to do something about it”. And the press in the UK blubbers and snivels at the thought of having a press regulator they can’t directly control. 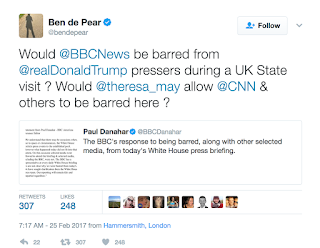 What is starting in the White House is a premeditated attack on the freedom of the news media to report as they see it, without fear or favour. And the new occupant of that building has been - all too hurriedly - been invited to make a State Visit to the UK by our new and not at all unelected Prime Minister. Well, if Theresa May wants to show her commitment to the freedom of the press - and broadcasters - she has a very simple solution.

And that is that the invitation to Trump to make a State Visit to the UK be put in abeyance until the attack on free speech being made on his behalf ceases. No doubt there can be concerned diplomatic noises made beforehand, but the intent should be clear: a Presidency that is copying from the Nazi playbook should not be given the cachet of having the Royal Family wheeled out to give it its implicit seal of approval.

Theresa May is all for press freedom? Then she should stand up to Donald Trump. Now.
Posted by Tim Fenton at 12:48

This is no more than you'd expect from Trump and those who surround him. But, Tim, as an expert spotter of 'look over there' techniques you should also be pointing out that the big story in the last couple of days has been the admission by the White House that they have been leaning on the FBI to portray in a more Trumpophile manner the investigation into Trump/Russia contacts, which itself is another brick in the wall of the whole 'what-hold-does-Russia-have-over-Trump' story which could well ultimately bring him down. Outrage at banning certain news media might well distract precisely those media from concentrating on (and concentrating their readers' minds on) the ultimately bigger story. If Spicer lets all the media back in again next week (after the White House/FBI business has cooled down) he'll have achieved his aim.
The media should be on their guard now to expect, recognise and pre-empt future similar outrage-inducing acts which just happen to occur conveniently when 'look over there' distractions are required.

"Well, if Theresa May wants to show her commitment to the freedom of the press - and broadcasters - she has a very simple solution."

Holding hands with Donald? He's not a good bloke
With links to Farage and Putin not a good joke
To force the commons to vote
Into the UKIP boat

Appeaser Theresa
Madam, what's your game?
Mail and Sun advisers
Make sure the legals get the blame

Appointing brexiteer numpties to negotiate their way through
Trade deals and tariffs, it's making us all blue
How can we justify
Leaving it up to you?

I realise that there are more important issues in the world, but, to get some idea of the moral stature of the man, just Google this:

"The deeply paranoid state of the new administration in the White House..."

It might be a new administration, but there's nothing new about the USA being deeply paranoid. It's been that way since its inception, which the late Gore Vidal described as lacking "...moral validity from the start." It has always been a colonial expansionist thief state at war for almost its entire existence, including internal genocide and invasion of all its neighbours. Not satisfied with that, it has taken over the murderous role played by old European empires. Naturally it now seeks war with Russia and China, all of it backed up by craven far right NATO Europeans.

In fact Trump is merely the latest variant on an old theme. He'll be back in line soon enough, probably by threatening Iran or some other target of the lunatic homicidal thieves in Foggy Bottom, Langley and the Pentagon. The moment he starts interfering with the usual profiteers he'll be toast. The British establishment will of course continue its cringing poodle role.

Meanwhile, Trump's spat with the media is a comedy sideshow where a ranting righty bashes ranting righty media and its usual fake news and lies. Enjoy the rabid spectacle while it's there because it won't last much longer. Then it'll be back to tin lapel badges, flag waving bullshit, "exceptionality" shite, media propaganda and all the other Yankified gun-waving garbage.

It's all so predictable.

My money is on him having a long memory over BBC2 showing this:

'Google this' (Anon above) should have read:

Mrs May and her Goverment are not about to stand up for the BBC. They wish to weaken it daily.