Phone hacking is out. Other kinds of illegal information gathering - reverse phone number searches, Police National Computer access via bent coppers and Police civilians, NHS records and more - arouse suspicion. Surveillance is expensive and also can fall foul of the law. So what’s a tabloid paper to do if it wants to stay ahead of the game? 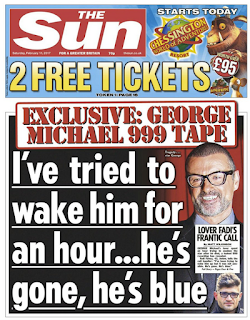 Many in and around the news media may be asking that question this morning as they join the dots and fill in the blanks from the Guardian’s unduly reticent article reporting the disquiet of George Michael’s relatives over the apparent leaking of the transcript of the 999 call made on Christmas Day morning by the singer’s partner Fadi Fawaz.

That article, “George Michael's family demand investigation into 999 call leak”, goes on to tell “Lawyers for family of singer, who died in December, say they are appalled that recording and transcript were made public …Members of George Michael’s family are demanding a full investigation into the apparent leak of a 999 call made after the singer’s death … A statement issued by solicitors acting on their behalf said Michael’s loved ones are ‘truly appalled’ that the audio recording was made public”. There is more.

The family said in a statement “George’s family and friends are extremely upset and truly appalled that such a personal, painful and clearly confidential recording has been leaked … we will be ensuring that a full investigation takes place to establish how this material was made available … We firmly believe that anyone contacting the emergency authorities in situations such as this should be entitled to expect that recordings will not be released to the media”. But the Guardian does not name the paper concerned. So I will.

The contents of the 999 call were carried, as an exclusive, by the Murdoch Sun last Saturday, trailed on the front page with characteristic lack of subtlety: “EXCLUSIVE: GEORGE MICHAEL 999 TAPE … I’ve tried to wake him for an hour … he’s gone, he’s blue … LOVER FADI’S FRANTIC CALL”. So how did they get the tape?

This is where it gets potentially very bad for the inmates of the Baby Shard bunker. Unless Fadi Fawaz taped his end of the conversation - highly unlikely, given the urgency of the situation and his state at the time - the Sun’s source has to have been the emergency services - either directly or indirectly. And that begs another question.

If the Sun got the tape from the emergency services - by whatever means and by whatever route - was it handed to them merely as some kind of gesture of public-spiritedness by those concerned? Or did some - as yet undisclosed - sum of money change hands? The public interest in the leaked information is not unadjacent to zero, and so that defence would be a non-starter. And a corrupt payment could mean big trouble.

Not only is this a potential candidate for use of the Bribery Act, but it is also a powerful reminder of the need for that second part of the Leveson Inquiry that the Government now seems so keen to kick into the long grass.

Of course, the questions could all be answered if Sun editor Tony Gallagher were to come clean and tell the world how his paper came by the recording. In your own time, Tone.
Posted by Tim Fenton at 10:00

The words "Tony Gallagher" and "clean" don't belong in the same sentence.

The man, like his "news"paper, is a piece of poisonous garbage.

Well done, Tim for sticking up for those who need it.

Although, I am getting concerned that tactics may now be used by or for SunHQ that could see people stitched up for accusing them of stuff they haven't done or said.

I can assure you that everyone on duty at South Central'S call centre are being interrogated one by one by the bosses. I hope whoever did this comes clean before the police are called in.

Another angle could be if the phone used to make the call was bugged/tapped?

Interrogation of call centre? Surely the media offices coms are tapped/monitored. Especially with past behaviours. Intelligence would be commiting career suicide if they haven't.

Was it handed to them merely as some kind of gesture of public-spiritedness by those concerned? Or did some - as yet undisclosed - sum of money change hands? I would guess the second. In which case plod needs to follow the money and I hope someone gets a custodial sentence for corrupting pubic officials Sadly on previous form this won't happen