Bad weather in both Spain and Italy has impacted the growing of vegetables during the winter months, and especially salad vegetables like lettuce. Given the aversion of many of the paper’s readers to eating that sort of thing, one might have thought that the Murdoch goons at the Super Soaraway Currant Bun would not be interested in such news. But the opportunity to put the boot on on all those ghastly foreigners was too much to pass up.

And so it came to pass that the Sun assailed its readers with the shock news “Spanish supermarkets hoard fruit and veg while Brit shoppers are being rationed … Spaniards stockpile five-a-day as British consumers show signs of panic buying”. But there was, as Captain Blackadder might have observed, only one thing wrong with the idea that the Spanish were hoarding produce - it was bollocks.

Still, if at first you don’t succeed, well, suck a little more seed, eh? Daniel Jones’ lame article goes on to tell “SPANISH supermarkets are stockpiling lettuce and other veg even though British shoppers are being rationed … Aisles overseas are overflowing with salad veg while shoppers at home are having to go short”. The shortage must have reached Prêt À Manger and the pubs near London Bridge station!

What was the problem? “Some UK stores have run out of sweet gem and romaine lettuces. Tesco and Morrisons are limiting customers to three icebergs each amid signs of panic buying … Experts blame a drought and cold spell in Murcia, Spain, which grows nine in ten UK-sold lettuces”. The Sun has rediscovered its enthusiasm for experts! 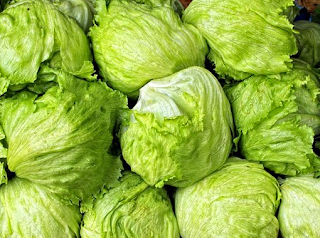 The photo captions were loaded appropriately, with readers told “Signs of panic as Sainsbury’s shelves sit empty in Chelmsford”, although no panic could be seen, and we are not told at what time of day the shelves were empty. But we are informed that “Spanish producers show off produce at gastronomy event”, even though when that event took place, we don’t get to find out. But we do know “In Spain, we saw dozens of icebergs for sale at [a] Mercadona supermarket in Molina de Segura, Murcia”.

Perhaps that viewing took place after the shelves had been stacked. What is also clear from the Sun’s photos is that there is zero evidence of those shelves “overflowing”. And what the Sun manages to ignore is that it’s only human nature for growers to get the best price for their produce - which they won’t get from buyers at British supermarkets who screw their suppliers to the floor on price, and have done for decades.

Plus it will only get worse after Britain leaves the EU. Not only will there be shortages, but the stuff will most likely cost more - unless we want to see it go to developing markets in other countries. As Alan Titchmarsh - whose comment got into the Sun’s article, despite it being inconvenient to the Murdoch mafiosi - put it, “It reminds people not to take food and food producers for granted”. Besides, Sun readers could always try growing their own.

But for the inmates of the Baby Shard bunker, that would be too much like hard work - the Murdoch goons prefer to have a chap to do that sort of thing for them. When it comes to salads, the Sun hacks are a bunch of tossers.
Posted by Tim Fenton at 13:09

No shortage of crap in the Sun so, no reports of people panic buying the rag.

This is the "free" market in operation. It's their produce and theirs to do with as they wish.

Morals and fairness have nothing to do with it. But profiteering capitalism has.

So fuck you, Chelmsford. And the Scum.

What reason you have !!!!!. Now the Spaniards who grow them we will run out of vegetables for the Queen's children, if there are few of us !!!!