The Murdoch goons at the Super Soaraway Currant Bun have a problem today: they want to keep up the assault on former footballer David Beckham, but have no more dirt to sling. What to do? Simples: they just make it up. So readers are told “Beckileaks Exclusive … How Becks grovelled to Queen for a knighthood … GOLDEN CRAWLS”. The “story” is not exclusive, and what’s worse, it’s mostly invention. 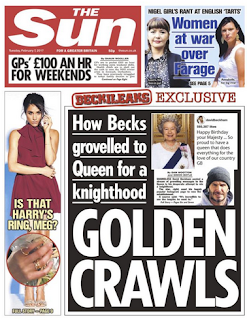 Things don’t improve with the supporting article, which makes the untrue claim “How shameless David Beckham grovelled to the Queen in desperate bid to get a knighthood and said he was a ‘new Audrey Hepburn’ on Instagram … Gong-obsessed footie hero spent 18 months toadying to the Royal Family and even intervened in the Scottish referendum”. Note the quote marks round “new Audrey Hepburn”. Cos it’s not true.

So what did Becks actually do? Here we see just how lame the latest attack on him really is: “SHAMELESS David Beckham posted a stream of grovelling messages to the Queen in a desperate attempt to win a knighthood … The star used his hugely popular Instagram page to woo the establishment”. That’s right, the Sun has trawled his Instagram account, and called it “exclusive”. And that “stream of grovelling messages”?

After sneering “The gong-obsessed footballer spent 18 months toadying to the Queen as part of a campaign to woo the Honours Committee … It has emerged his Instagram account, with 37.2million followers, was repeatedly used to help push his claims for a knighthood”, we finally get the justification for this bilge. “Beckham’s account has pictured the Queen five times in 18 months”. FIVE TIMES IN 18 MONTHS?

Oh, just f*** right off. Two of the photos are of him meeting Her Maj. It’s hardly “grovelling” to tell his followers he met Brenda. And, as for Becks saying he was a “new Audrey Hepburn”, this is total crap. As the Sun report admits, he was expressing his pride at following in her footsteps. And even then there is a problem.

The Sun concedes “The emails have suggested Beckham did not have direct control over his Instagram account, with the posts likely written by advisers” but gets round this by inventing “a source close to the star”, which probably means someone in the Sun newsroom who once stood next to Beckham at an awards bash. That “source” is able to reassuringly tell “David personally runs his Instagram account … You can tell by the way it is written”. Yeah, like you can tell what a bunch of hypocrites the Sun are.

While the Murdoch goons are whinging about Becks posting five times in 18 months about the Queen, today’s front page speculates - without any actual facts - on whether actor Meghan Markle is wearing Prince Harry’s ring. And at the same time, they are apologising for telling a pack of lies about the same Prince Harry last October - having run a story which Kensington Palace told them was not true.

The Sun has no room to call Royal Obsession on anyone. Plus all their attacks on Beckham are either recycling what the mainland European press has already run, or dredging through social media feeds. They won’t half look daft if Becks gets a K in the next honours list.
Posted by Tim Fenton at 13:06

He's admitted calling the honours committee and "bunch of c***s, so I think it's rather unlikely they are going to give him him anything.

I can't say I have much sympathy for Beckham. After all, he made the decision to join the "celebrity" circuit. Which automatically means it's open feeding off him for the Scum paparazzi rats and others. Which is not to say it even approximates civilised behaviour.

He might be well advised too to check if his moby's been hacked.

Still, doubtless he can mop up the blood with all the money his "celebrity" has brought him.

I'd say that front page is likely hugely libellous.

Even her majesty would know the truth on that if it never happened.

You don't get a knighthood by asking for one.

Yet again The shit rag Sun is surpassing its own vileness and IQ with that one.
They fail at basic truth telling and that is the reason they are in the terrible mess they are.
It's going to get a lot messier.

A 'mega celebrity' recently took out a superinjunction - see the front page of last sunday's Sunday Times.
It's pure coincidence that Beckham is now copping all this flak isn't it?

I really don't care about this stuff, but doesn't "five times in 18 months" mean "we managed to find a handful of references to the queen, the first and last of which which were a reasonably (to the Sun) 'short' distance apart, because 'six times in five years' would have been stupid even for us"?