After the major sporting events - like the Olympic Games - comes the inevitable question of what to do with the venues, often specially constructed for what turns out to be just a fortnight of competitive sport. After Manchester hosted the Commonwealth Games in 2002, what is now the City of Manchester Stadium became the home of Premiership team Manchester City. This set a precedent for London to follow. 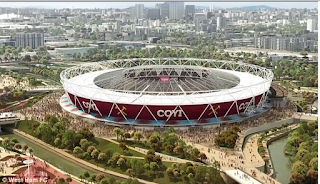 So now the stadium that hosted the Olympics four years ago has become the new home of West Ham United, whose home of more than a century, the Boleyn Ground in Upton Park, will soon be demolished. The deal under which the club have become “Anchor Tenants” has proved controversial. Just how controversial was made clear last year.

As the BBC has reported, “West Ham United will have many of the running costs met by the taxpayer when they move to the £700m Olympic Stadium next year”. Such as? “West Ham will not have to pay for a range of staff including cleaners and turnstile operators when they move into the Olympic Stadium … Heating and lighting costs will also be covered by the stadium managers, the London Legacy Development Corporation”.

There was more: “Two separate football business experts told the BBC the value of the services amounts to between £1.4m and £2.5m a year”. The club is paying rent of around £2.5 million a year. And it’s got a 99 year deal. So despite the entreaties of vice-chairman Karren Brady, the impression is given they’ve got a nice little earner.

But now, it seems, they are back at the table demanding more! I kid you not: as the Guardian has told, “West Ham fans are calling for urgent action to resolve stewarding and segregation issues that have marred their move to the London Stadium”. That’s the stewarding that someone else pays for under their tenancy agreement.

The club “will this week hold talks with the operators of their new £701m home, with each understood to blame the other for the situation that led to home fans clashing with one another and with away fans during the game against Watford”. And guess what? Here it comes: “The club have demanded a police presence at the ground, which would have to be paid for by the operators under the terms of the lease”.

And, d’you know, many neutrals will look at the situation and conclude that whatever the agreement struck between the club and the stadium’s owners, they are already getting quite enough for their £2.5 million a year - and that, if they want the cops to turn up on match days, they can open their wallets and pay for it themselves. End of story.
Posted by Tim Fenton at 12:51

Got to hand it to those cockneys inside the M25 ghetto.

They don't half know how to whinge until they get more money from the rest of us.

Must be all those "entrepreneurs" and "creators of wealth."

Well in, all you Pearly Kings and Queens.

Nah, as a 'Corbynista' but also a 'Hammer', I make you dead right on this one. It's been an absolute travesty - I'm not sure who I blame more, Brady/Sullivan et al for ruining what was a fine legacy at the Boleyn Ground, or the whole Olympic lie - as good as the London games were, they had to find a way of giving the stadium away otherwise it'd have been a visibly huge white elephant. Members of my family were there Saturday, and they attested to the shambles.

We have learnt from numerous football tragedies that the safety of fans is paramount.

If the club can't meet that basic requirement they aren't fit to run a stadium and until they can games should be suspended.

I'm amazed they can have games with no police presence in the ground.

Can't quite make out the new letters on the side of the stadium......Do they read "COYI"?

I can't stop laughing at their latest blunder. Just when you think they can't become a bigger laughing stock, they prove you wrong..
All we've heard for the past few years is how this new stadium will take them to the next level and how they will be a major force in English football.
Don't seem to hear from the 3 Stooges these days. They've gone awfully quiet.
West Ham fans fighting each other, leaking roof, hours wait at Stratford station, no atmosphere, miles from pitch, people standing - to name a few issues.
How wrong can you get it? it's even funnier to see so many West Ham fans fall for their Bull. Gullible doesn't even cover it.
R-I-P West Ham.