As if to remind the world that some days have passed since the last instalment in their personal soap opera, Rochdale’s still nominally Labour MP Simon Danczuk is back in the news - but this time in a bit part, with his self-promoting ex-wife Karen being inexplicably featured in the Murdoch Times, splashed across two pages, and teased on yesterday’s front page as “Selfies, Simon and me: the extraordinary life of Karen Danczuk”. 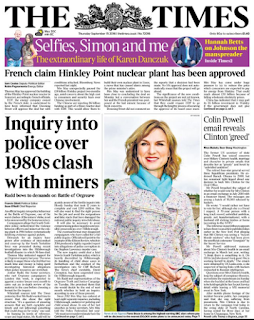 Sadly, those readers looking for something “extraordinary” will have been disappointed: there is little more than the usual vacuity on display (and, yes, more cleavage). We learn that Kazza “jumps out of her white Range Rover, looking lithe and tanned”, and soon she gets down to spinning a few whoppers. “I never wanted to be the bitter ex-wife who got angry when her ex got a new girlfriend” she declares. Ri-i-i-ght.

When Spanker Si had his brief relationship with that 22-year-old who was snapped with him outside the Lowry Hotel in central Manchester, it was at first believed that he had set up the Fame Flynet snapper. My information is that it was, in fact, Kazza who had the couple papped - but not because of being the bitter ex-wife, oh no.

Of the embarrassment caused to Danczuk’s two older children, she claims “No-one would know who they were if you didn’t keep selling stories to the press”. Like she keeps on selling stories to the press. There is more flagrant deceit: “I never put any pictures of my boys online, full stop”. So it must be someone else who puts those photos of the two kids online, mustn’t it? Because they’re there.

And more: “She hasn’t decided if she will change her surname now that she and Simon, 49, are divorced”. Ask her again after he gets expelled from the Labour Party. And then come her own fantasy political ambitions. “She is still fascinated by politics and one day may even try become an MP for her home town, Middleton”. No she won’t. “[Corbyn] has never had a conversation with me”. He saw her coming.

But she really, really believes in her value to the Labour Party: “I’m probably one of the most prominent working-class people in the Labour Party”. Yeah, right. Apart from the tens of thousands of other Labour members who aren’t interested in shameless self-promotion, instead giving their own time and opinions selflessly while she’s farting around chasing a celebrity she doesn’t merit.

Readers are, in the meantime, reminded that she once ran her own business and was a Labour Councillor, but not reminded that both enterprises, requiring things like hard work, ended in failure. And that “She hopes that appearing in The Island will reveal her in a different light”. Yes, one that cons enough people into believing she is enough of a Sleb to merit More And Bigger Paycheques For Herself Personally Now.

Karen Danczuk is, quite simply, delusional. The press ought to let her down gently, stop humouring her agent, and suggest she does like all those other working-class Labour people - stop wasting everyone’s time, then go and get a proper job.
Posted by Tim Fenton at 10:34

As I understand it, the story of Spanker Danczuk shagging the 22 year old on a sofa with the kids next door was first given to the meeja by none other than Mrs Danczuk herself. That the meeja (well if you can call The Scum that) then contacted the young woman concerned and co-erced her to tell all, granting her anonymity, or if not they would run Kazza's version anyhow along with name & photo.

Rock & a hard place? You bet. Kazza, mightily miffed by not being the star of the show, and having her own sold story overshadowed by the 'sex on the office desk' revelations, which I don't think was what she had bargained for, then went on a rant against the 22 year old on Twitter, and named her and her place of work anyhow.

“I’m probably one of the most prominent working-class people in the Labour Party," said Karen as she jumped out of her white Range Rover....

“[Corbyn] has never had a conversation with me.”

At a very rough guess I'd say that has added about another twenty thousand votes to Corbyn's advantage in the leadership election.

Plainly, Corbyn is a man of some taste and judgment. Whereas the Danczuks and their New Labour apologists are not.

Simon and Karen make good "mates" for someone like...oh I don't know...let's say John Mann or his hoppo McTernan.

http://www.dailymail.co.uk/femail/article-3792650/Karen-Danczuk-says-regrets-revealing-selfies-appears-Morning-faces-barrage-abuse-viewers-say-t-believe-word-says.html
"She said: 'I want to to stablise the boys before I move on but they have told me to start dating. But where do you start looking?'"
Quite a problem. Celebrity Island? Oh. I see you've already thought of it.
And if you can face the video.