Yesterday, the Murdoch Sun had as its front page lead not that Young Dave had thrown in the towel and gone off to spend more time with his retired Police horse, nor anything to do with Brexit, nor even knocking the Labour Party. No, for the Murdoch mafiosi, the name of the game was The Great British Bake-Off. And the show was not even airing: it was all about the BBC losing the show to Channel 4. 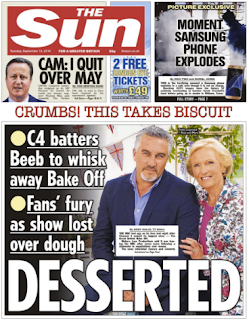 “Crumbs! This Takes Biscuit … C4 batters Beeb to whisk away Bake Off … Fans’ fury as show lost over dough … DESSERTED” frothed the front page. And it was, indeed, all about dough, as the BBC had offered £45 million for another three years’ hosting the hit show, and C4 had bid a whopping £75 million. But then the whole thing began to unravel, especially when it was discovered that the Murdoch doggies were not mere spectators.

First, half of GBBO’s presenters, that being Sue Perkins and Mel Giedroyc, decided they would rather not transfer with the show to C4, thank you. This slowly sank in with observers, who realised that C4 had bought only the rights to the format: Mel and Sue were not part of the deal. Eyes are now trained on veteran presenter Mary Berry, who is thought to be BBC through and through. If she declines, it could mean trouble.

Without the presenting team, Channel 4 will have bought no more than a husk, an empty shell. Moreover, for a broadcaster under fire from the right-leaning part of the Fourth Estate, which is slavering over the prospect of seeing it sold off, acting like a commercial competitor to the Beeb does not look good. And then someone made an interesting discovery about the production company that owns the GBBO format.

Lover Productions was until two years ago a totally independent outfit. But during 2014, a 70% share in the company was acquired by none other than Sky. That’s the broadcaster the Murdoch mafiosi own 39% of. The thought then entered that having both the BBC and Channel 4 screwed over was just what Creepy Uncle Rupe would have loved to see. And sure enough, today’s Sun editorial reflects exactly that theme.

“BY stealing Bake Off, Channel 4 has wrecked Britain’s biggest show and shredded its own thin case for remaining a publicly-owned broadcaster … It has always fended off privatisation demands by trumpeting its record of innovation and commitment in public service programming. Yet now it swoops in - a predator armed with £75 million - to nick the BBC’s best asset … How very innovative”. And there was more.

“What a public service too, to swipe a programme loved by millions … perhaps the only BBC show some watch in return for the compulsory licence fee … It plainly wants to compete aggressively like a commercial broadcaster - so the Government might as well now flog it to a real one … we could finally see the back of the leftie propaganda it calls news”. The vindictive Murdoch mafiosi completes its coup and crows about it.

Standing up to Kelvin McFilth, embarrassing Tony Gallagher, and actually broadcasting news - these are all major transgressions, which have clearly incurred Don Rupioni’s displeasure. So now he has had his revenge, with the BBC losing a key show, Channel 4 scoring an owl goal, and the Government urged to emasculate it further.

Right now, someone at Channel 4 is kicking themselves. But it’s already too late.
Posted by Tim Fenton at 09:24

Really, Tim, does anybody with common sense give a rat's ass about a TV programme on baking?

What a commentary on Brit TV and "culture"!

Consumerism at its most sickening.

Just think what that £75 million could do in any of our impoverished communities up and down the country.

Meanwhile, a report has just exposed the Bullingdon Pig's Head Boy's mass murder in Libya as just as much a war crime as Blair's in Iraq, Yugoslavia and Afghanistan. To say nothing of selling weapons of mass destruction to the Saudi crackpots.

But an enema of a TV programme gets front page treatment and lies.

Britain: a failed, far right rogue state, a yapping poodle to the USA.

Whilst I couldn't give a stuff about the actual programme it does show the foolishness of C4. In some ways its Top Gear Mk2 - thinking a programme is successful purely because of its name and format - the presenters somehow become a forgotten commodity in the success.

If Channel 4 were in football transfers they would spend millions buying a successful players boots.

Christ, you must be fun at parties. You've managed to drag Blair's war crimes into a post on the Great British Bake Off, whilst simultaneously demanding that C4 pay for, I dunno, new housing and community centres in impoverished areas of the country? I can only imagine that a conversation about whether to get poppadums ends up with Owen Smith somehow responsible for British Imperialism in India.

The success of GBBO isn't really because of the baking. It's liked because it says to people that in an endless sea of misery, bad news, xenophobia, and the constant worry that the world might not last much longer, here is a show where everyone is basically nice and pleasant. It's a show you can watch and think "maybe people aren't all bad". And some parts, like Nadiya's success last year, showed that maybe we aren't the horrible racists we currently seem determined to prove that we are.

You don't like it. That's fine. I'm not mad on golf. But I don't go on a tirade where I ridiculously call Britain a "far right rogue state" just because the Ryder Cup is on.

Have C4 actually signed and paid without confirming what the deal involves? That sounds a bit mad to say the least. Is it possible they can walk away if the presenters do likewise? In which case Love/Sky will be the ones with egg on their faces.


But the way that Sky have been involved and the way that The Scum have then gone on to knock licence paid public service broadcasting is as important as all the things that highly strung Anon1 is banging on about. So up himself with high moral values he's missed the really important point - one meglomaniac sitting in New York wants to control what we watch and read, no doubt so that we will vote the way he wants.

Remember when I said this: ”You just don't understand the readers, do you, eh? He's the bloke you see in the pub, a right old fascist, wants to send the wogs back, buy his poxy council house, he's afraid of the unions, afraid of theRussians, hates the queers and the weirdos and drug dealers. He doesn't want to hear about that stuff (serious news).”

1. The argument that watching GBBO means you can't be aware of current affairs is nonsense. No-one has ever not looked into the situation in Syria because of a TV show that broadcasts 10 one hour long shows a year.

2. The show has more female presenters than male. One is a lesbian. The winner last year is a Muslim. Doesn't really feed in to the whole "the British public are all sexist, racist and homophobic" argument.

The Sun seems a bit confused - not for the first time. The "batters Beeb" line suggests a dig at the BBC but then they decide to turn their fire on Channel 4 instead, and for once they have a point. At a time when its unique funding model is under attack from the government, to behave in such a nakedly commercial fashion is short-sighted, to say the least.

GBBO is a protector of ar British wya life, like plyin golf, stoppin’ wogs at Cally an wochin East Enders.

An wer wud Essex be wivart the sooper sore awye Sun?

It's also worth noting that Love Productions ignored financially higher bids from commercially-owned ITV and Netflix, seemingly so that publicly-owned C4 could be thrust into the shitelight.

This is a pretty impressive double-pronged attack by BSkyB - the BBC loses its public appeal a little more and C4 is presented as an evil entity that ruins lovely cake TV and should be privatised.

Was he ever called to Leveson or was he worried that his ex wife would whack him?

Privatising cakes will solve everything.