As Zelo Street regulars will know, our free and fearless press is notorious not only for what it reveals, but also what it chooses not to reveal. The ability of the Fourth Estate to deploy selective use of facts in pursuit of an agenda is the stuff of legend, and no more so than when it comes to bashing foreigners. When it is foreigners who jail our former soldiers, then that agenda is ramped up to fever pitch. 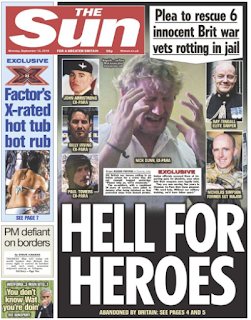 So it was when a group of ex-soldiers were jailed in India last January on gun-running charges. The facts are, as so often, disputed, but what is not in dispute is that the group were providing armed protection against pirates in the Indian Ocean, and had been judged to have entered Indian territorial waters illegally. A number of weapons was found and the former soldiers were jailed for running guns to local jihadis.

Attempts to have the men released have proved unsuccessful; the Indian authorities are not generally responsive to online petitions and press campaigns in the UK. But then the Murdoch doggies at the Super Soaraway Currant Bun decided to wade in with their customary lack of subtlety to tell readers today “Plea to rescue 6 innocent Brit war vets rotting in jail … HELL FOR HEROES”. So how is this selective disclosure?

Here’s the spiel: “The ex-soldiers, with a combined 74   years of service, were jailed in January after being detained as they protected ships from Somali pirates. Indian officials accused them of importing guns for jihadists, even when told their weapons were legally held … But the Brits insist they were involved in an operation to protect ships from Somali pirates - and their weapons were lawfully held to carry out their jobs”.

There was more: “All six were first detained by coastguard officials, then handed five-year terms in January when a court ruled they had failed to prove they were not importing guns to arm jihadist terror gangs”. The Sun trowels on the military service angle, but the article manages to omit one key word. The Mail did not make that mistake in January.

This is their account: “A group of British pirate hunters have been jailed for five years by an Indian court after they were sentenced on weapons charges brought against them while they worked in the Indian Ocean … The six ex-paratroopers were working as mercenaries for U.S. company AdvanFort to protect ships from Somali pirates when they were arrested after entering Indian waters in October 2013”. Working as mercenaries.

No matter what their previous military service, mercenaries do not enjoy any of the protections of the Geneva Conventions that would normally be applied to prisoners of war. Worse, the Protocol to the Geneva Conventions regarding mercenaries has not been ratified by India (nor, interestingly, has it been ratified by the USA, not that the Sun will complain about that). Worse still, the mens’ American employer has abandoned them.

Nor is the Sun going to get anywhere telling readers that the men are “innocent”. The Indian authorities, the Murdoch goons will soon find, are unlikely to be swayed by foreigners sticking their bugle in and telling them how to run their justice system. But the paper might gain some credibility if it came clean about who it was defending.

The upside of being a mercenary is the reward of money. The downside is that many Governments around the world take a dim view of the profession.
Posted by Tim Fenton at 10:22

Secondly, there's a good deal more to those "mercenaries" than meets the eye......

Thirdly, I am willing to bet the Indian authorities know it too......

Rupert should no longer be allowed to run any communications business.

Read my sensationalist revelations in my soon to be released book.