Ever on the lookout for anything that will shore up the circulation of their increasingly piss-poor “newspaper”, Rupe’s downmarket troops at the Super Soaraway Currant Bun made an astonishing discovery this week - well, it clearly astonished them - and that was the discovery that stately homes can be hired out by film and TV companies. Those stately homes include Blenheim Palace in Oxfordshire. 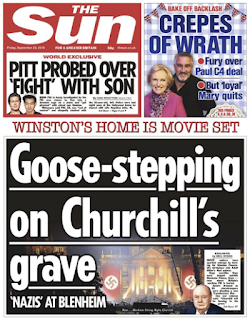 In fact, Blenheim has been used as a backdrop for decades, and for the current Duke of Marlborough, Jamie Spencer Churchill, this is a no doubt welcome source of income, helping with the cost of maintaining the estate. But when a film company hired the Palace as part of a new Transformers film, the plot of which featured Nazis, the Murdoch doggies were on hand to crank up the outrage - and the dishonesty.

“Winston’s Home Is Movie Set … Goose-stepping on Churchill’s grave … ‘NAZIS’ AT BLENHEIM” thunders the front page lead today. It is true that Winshton was born at Blenheim, but it can hardly have been called his home, as in his property: Churchill’s long time home was Chartwell House in Kent. This does not get a mention.

Instead, readers are regaled with “WINSTON CHURCHEIL War veterans fury as filmmakers stage Nazi invasion at Sir Winston Churchill’s home … WWII survivors were appalled after Blenheim Palace was draped with huge swastika flags for a new film … FURIOUS war veterans hit back last night after a Nazi invasion at Sir Winston Churchill’s birthplace … They attacked film makers for turning historic Blenheim Palace into an HQ for Hitler”. As Sir Sean nearly said, I think we got the point.

So how many WWII survivors were appalled? Well, it’s a very round number: “Tony Hayes, of Veteran’s Association UK, said those left who fought in World War Two ‘will be appalled by this’”. A very round number which happens to be Zero. But there is also Richard Kemp, former commander of British forces in Afghanistan, who claims “I know its a film, but it’s symbolically disrespectful to Churchill. He will be turning in his grave”.

It gets worse: one photo of Winshton is captioned “Veterans have been left furious at the desecration of the wartime Prime Minister's home”. But enough already: Blenheim Palace is not sacred ground - so “desecration” is just OTT - and despite the “grave” references, Churchill was not buried there, but at nearby St Martins Church in the village of Bladon. So that means the Sun has breached the IPSO Editor’s Code once again.

Blenheim can’t credibly be called Churchill’s “home”, he wasn’t buried there, no WWII survivors commented, it’s doubtful that any of the actors did the goose-step, and the headline is not supported by the article that follows. But unless Jamie Spencer Churchill makes a personal complaint - he’s probably got better things to do, like running Blenheim Palace - IPSO will take no action and the paper will get away with it.

There is, of course, one way to complain more effectively. Don’t Buy The Sun.
Posted by Tim Fenton at 10:27

I think it would save you a lot of effort if you posted about the Scum only when it published something honest.

Meanwhile, the rag is beginning to die of its own disgusting poison. After decades of Murdoch's muck, people have simply tired of it.

There's a long way to go yet but the process has begun. For which we owe a huge debt of gratitude to the Hillsborough families.

The process will only complete when we have a media system which holds liars and propagandists to account at the same public level as their criminality and immorality. And of course hit them with something more than derisory fines. At the moment IPSO is a corrupt, cringing bad joke.

I believe most of us look forward to the day when Murdoch and Rothermere are driven into bankruptcy and their Uriah Heep jobsworths, cowards all, have to shuffle into the dole queue like the millions they jeer at from behind their word processors.

The Grauniad has covered this item of 'news' and they've received hundreds of online comments. It's a good job that nothing serious is happening today in the real world.

Thats not all my husband breaks.

Read my sensationalist story in the Mirror and watch my exclusive no holds barred detailed revelations on my marriage to the most hated man in the media.

I might even tell the BBC who can tell the FBI about his outbursts.

I don't know if the article I read is a later version of the one you reviewed, but nowhere does it refer to Blenheim as Churchill's "home".
The word "desecration" does not appear.
And whilst no veterans may have complained directly, their number certainly isn't zero. According to the Office of National Statistics the numbers of veterans who fought in WW2 in a combat role remains in the "several thousands" (2015 statistics)

2 The online version of the article also uses the word "desecration": this has been copied directly from the Sun website.

3 The number of surviving veterans is academic: the point was that the Sun did not field a quote from any of them.