Some political comebacks succeed gloriously: there is always the example of Churchill, written off twice but returning to lead his country through World War 2. But most are of limited success, while some would have been best not attempted. Into the last category has fallen the disgraced former Defence Secretary Liam Fox. 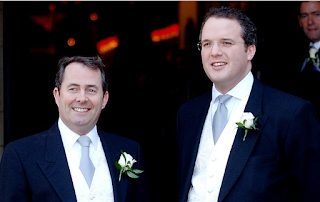 It's soon to be Goodnight From Them

Fox, whom Young Dave should have sacked well before the Guardian caught him behaving with less than total propriety, has been inexplicably summoned back from well-deserved obscurity by Theresa May to be International Trade Secretary, helping to chart Britain’s free trade future, no longer shackled by those ghastly foreigners in Brussels. 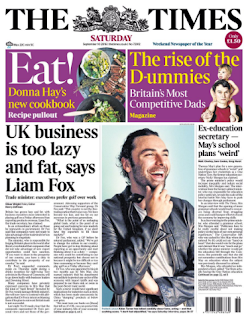 This new-found cachet no doubt gave him star status as a guest of Thatcherite pressure group Conservative Way Forward, at whose meeting he spoke earlier this week. He may have believed Chatham House Rules prevailed, but the Murdoch Times clearly had other ideas, and his less than felicitous remarks about British business have not only made their way into today’s edition of the paper, they are the subject of its front page lead. 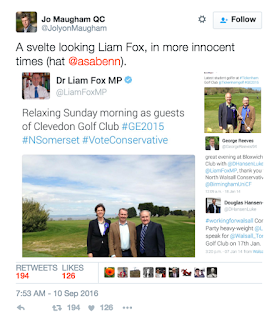 “UK business is too lazy and fat, says Liam Fox … Trade minister: executives prefer golf over work” reads the headline. Downing Street has already stressed that the comments are Fox’s personal opinions and do not form any part of Government policy. Which is probably as well, considering some of what he said. 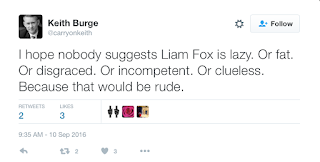 “We’ve got to change the culture in our country. People have got to stop thinking of exporting as an opportunity [!] and start thinking about it as a duty - companies who could be contributing to our national prosperity but choose not to because it might be too difficult or too time-consuming or because they can’t play golf on a Friday afternoon”.

Jo Maugham was not backward in coming forward with not just one, but four instances of Liam Fox on the golf course. Keith Burge - a company managing director - opined “I hope nobody suggests Liam Fox is lazy. Or fat. Or disgraced. Or incompetent. Or clueless. Because that would be rude”. And it got worse. 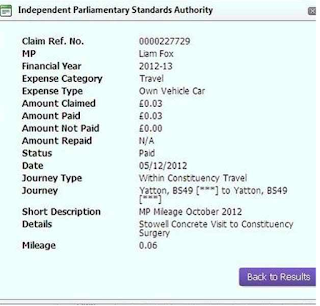 Richard Osman observed “Liam Fox has never run a business, never created wealth for anyone and never created a job in his life. So glad he feels free to lecture us”. And Piers Morgan reminded us that Fox was once so energetic, and not at all lazy, that he had claimed 3p for mileage in his constituency (a distance of 0.06 miles).

Liam Fox has shown that he is unfit for high office on more than one occasion. All that now remains is for Theresa May to acknowledge his talent - and sack the SOB forthwith.
Posted by Tim Fenton at 13:35

Our future in this mans hands. That's all right then, we can sleep soundly from now on.

Strange continuity from R4 Today this morning going from the former disgraced Minister story into the enlarged London Airport issue with an interview with one Grant Shapps.

Perhaps I should leave that one there.

She's going to let this malevolent bumblefuck roll on, insulting everyone he can find and screwing up his supposed job. Eventually he'll perpetrate some "fergodsake" atrocity and the deafening protests will ring in his ears as he scuttles off home with his P45 between his legs.

Don't be too hard on Liam Fox. For years he's dreamed of freeing Britain from the shackles of the EU, allowing the country to realise its full potential on the international stage.

Doubtless in the last few weeks, many people have explained to him in simple words that large sections of British industry are not competitive internationally due to low productivity. He's bound to lash out when his dreams have been ruined.

Moreover, if he's worked out that "soft" Brexit is the best solution, he'll know there's no need for international trade deals, because the EU will look after all that for us. And then there is no need for a Minister for International Trade.

Must be very frustrating for him.

I'd be more comfortable having an office of state run by Neil "Dr" (not an actual doctor) Fox than Dr (good grief he actually is a doctor) Liam Fox.

The man who can't be arsed strolling the 96 and a half metres for that visit.
He then goes on to lecture others about being fat and lazy.

My theory is that Dr Liam Fox is a performance artist, shining a spotlight on the absurdity of modern political life.
Like that bloke who spent days being a swiss goat.