So Farewell Then Seumas Milne

When Guardian pundit Seumas Milne took leave of absence from his post last year to become Jeremy Corbyn’s chief spinner, it was apparently just for one year, and his job was hold open for him to return. Now, after he failed to show yesterday at the media briefing ahead of Jezza’s conference speech today, the speculation has mounted. Is he off back to the Guardian? And is his hand being forced in making the decision? 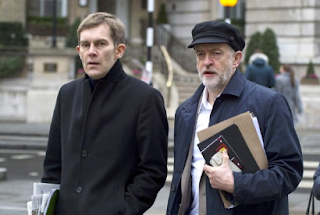 As far as Labour’s official position is concerned, no he isn’t: as Politics Home has told, although “Several senior party figures had claimed that the controversial spin doctor was on the verge of quitting - and could even be gone by the end of this week”, “a Labour source said the speculation was ‘untrue’ and added: ‘There's no plans for him to leave as far as I'm aware. It's business as usual … We don't comment on staffing matters’”. 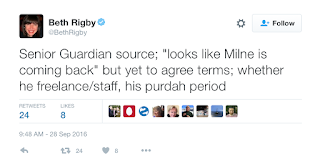 Kevin Schofield does, however, also note “The speculation came just days after Mr Milne found himself at the centre of controversy after he changed Shadow Defence Secretary Clive Lewis' speech to Labour's annual conference as he waited on stage to deliver it … A key section pledging not to re-visit Labour's existing policy supporting Trident renewal was removed from the autocue in the conference hall. PoliticsHome revealed that a furious Mr Lewis punched a wall in frustration after delivering the speech”.

And the denial is not going to hold up for long, after Beth Rigby of Sky News revealed this morning via Twitter “Senior Guardian source; ‘looks like Milne is coming back’ but yet to agree terms; whether he [is] freelance/staff, his purdah period … Told that senior Guardian figures expect to reach a deal with Seamus Milne ‘this week or next’ … Guardian insider says he only wanted to do year with #Corbyn & has ‘absolutely hated it’”.

One reason for taking Milne back was easy to deduce: “if Seumas Milne does go back to #Guardian, he'll apparently be keen to ‘spill the beans’ on the past year in team #Corbyn”. But there was also some unease at King’s Place: “Another senior source #Seumasmilne ‘def coming back [to Guardian] just ? of timing. Role not yet certain. A lot of disquiet about his return’”. And that may be what is forcing Milne’s hand. 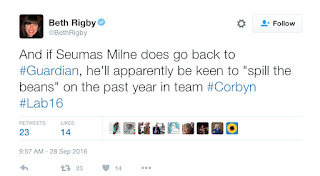 Since he left to work for Jezza, the paper has undergone a significant number of changes, mainly taking the form of staff being sent down the road in an effort to control costs. Although Milne is said to be on good terms with new editor Kath Viner, many who have been displaced or otherwise made uncomfortable by recent changes are bound to ask what gives Milne immunity from them, and the ability to come and go as he pleases. 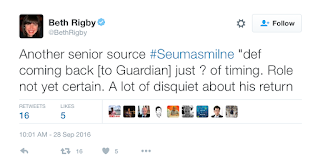 The thought occurs that Seumas Milne has been given an ultimatum: come back now, or don’t come back. Ms Viner cannot hold his job open for ever: there will be enough hostility to his walking straight back into the office as it is, although the prospect of the Guardian getting the inside track on Corbyn’s first year as Labour leader will have sweetened the pill somewhat. Ignore the denials: Milne is on his way out of Jezza’s office.

Who might succeed him? Fire up the 24-hour rolling news Speculatron once again!
Posted by Tim Fenton at 12:06

Have you seen the news?

I don't know what my husband is going to do when they ban paying for sex in Ireland.

He's going to expect me to oblige.

He'd fit right in with them.

Given that his journalism consisted of finding ways to blame either America or The West for everything awful, I had my doubts about his role at Labour. It will be no loss for Labour or for journalism if he's lost to both.

Given that Milne was among the first to expose the criminality and media lies deployed against - for one example - the Miners, you can bet hard right "journalists" (read: propagandists) will be relieved they don't have to contend with him.