10 Ways To Say Up Yours To The Sun

Continuing its campaign to slag off anything and everything EU related, the Super Soaraway Currant Bun has enlisted the services of Europhobe Tory MP Bill Cash to impart such gems as “there are many people who wish to return to traditional imperial measurements and there is no reason on Earth why they should not be allowed to do so, alongside metric”, which is good of him, because that’s what happens right now. 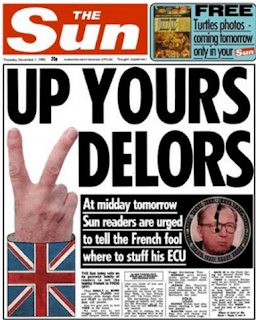 Old Bill (for it is he) tells readers “The fanatics and bureaucrats - who are often the same thing - wanted to persecute shopkeepers just for using imperial measurements their customers understood”. No Bill, the so-called “Metric Martyrs” were prosecuted - rightly - for using illegal scales. The potential of short measure, Bill, you remember - that was what brought us Weights and Measures laws, a long time before the EU?

Cash sets the tone; the Sun then rounds off with “10 OTHER WAYS TO SAY UP YOURS TO EU”. Not that they’re recycling “UP YOURS, DELORS”, you understand.

1 The Sun is calling for the return of blue Brit passports, ditched for EU-backed burgundy.

Will more fish miraculously appear? Well, no they won’t. So there would still be “tough quotas”. Unless fishermen were allowed to land as much fish as they could trawl out of the seas, in which case there would soon be no fish, and no industry.

VAT on gas and electricity was imposed by a UK Government. A Conservative one. You know, Sun hacks, the kind you support.

4 Have cleaner carpets by swapping weak, EU-regulated vacuums for powerful ones.

Vacuum cleaners that comply with the 1600 Watt limit are not “weak”. They are efficient - hey, I could say that without using quote marks, because it’s a fact, not some drivel made up by a Sun hack! And the UK voted for that regulation, which is mainly about saving energy - in other words, energy efficiency. You know, saving Sun readers money.

See 4. Sun hacks might be paid so much that they don’t need to bother saving energy and therefore money, but their readers aren’t.

6 Defend our morning tea and toast by using appliances free of energy constraints.

I don’t have tea and toast in the morning. And if I did, kettles and toasters that meet current and even future EU standards would not have a problem with it.

7 See the light by bringing back the incandescent bulb, phased out by EU regs.

What would be the point? The incandescent bulb is inefficient and obsolete, and the rest of the world has already moved on. But like Sun journalists, then.

I can buy jam - without the quote marks - at Aldi right now. I don’t need to reclaim anything.

9 Recycle tea bags, which a council banned amid EU fears over spreading disease.

Why would anyone want to recycle tea bags? Plus if a council banned the recycling, it was nothing to do with the EU.

Why should we abandon the country’s energy generating capacity? What would be the point? Even more dependence on imported fossil fuels? All that would be left - well, apart from the environmental damage, which the inmates of the Baby Shard bunker couldn’t care less about - would be lots of unused countryside. It would be a pointless waste of money. Bit like re-hiring Rebekah Brooks just so she can spend all day networking, then.

Vote to leave the Sun - just as millions of ex-readers have already done. Up yours, Rupe.
Posted by Tim Fenton at 10:13

It really is the dog in the manger attitude all over. Here are useful things - things actually saving people money - but because they (apparently) come from the EU, they're to be taken out and burned. And if it ever came about, and someone sets their hair on fire using a far too powerful hairdryer, who will be calling for a ban on them and a return to sensible outputs?

And as for the jam, what is this? Food standards? What tosh! An Englishman would never bilk another Englishman over jam, dontcha know! Or is this a return to the good old days of eating crap? Yeah, have your surfeit of cod and crap jam, 'cos there's certainly none tomorrow.

I think you'll find the best way to tell the Sun and its ownership where to go will come from the highest of high.

They should be treated like any terrorist.
Passports removed and expulsion where applicable.

Don't tell me that Murdoch can't see the hideous stuff being played out.
He owns the crap. If he doesn't stop it then someone else will.

It pains me to say it (actually it doesn't) but Sun readers really must be as thick as the proverbial 2 short planks. But then they fell for all the Leave bollocks so there's no doubt about it.

Not a Berxiter, Berks said...

Used tea bags are food waste and can go as compost. Somebody in Cardiff Council got panicky and thought that BSE (Mad Cow Disease) and Foot & Mouth disease could be present in tea bags used by the 'milk in cup first' brigade.

You don't hear Berxiters moaning about energy efficient car engines do you?

The Cardiff Tea Bag Scandal was one of the many lies that Boris Johnson was mocked for by the Treasury Select Committee. A council "gold plates" a regulation so obviously the EU is guilty for not saying what it didn't say.

I'm astonished that the Sun hasn't latched on to the fact Jezza makes his own jam, is he actually flouting EU rules and making fruit spread? Thus displaying his secret support for Brexit, obvs... but as the Sun supports Brexit it must be in a pickle.