Recent elections have seen the deliberate scapegoating of the wrong targets: in 2010, much to the shame of the Lib Dems, there they were telling anyone who would listen that Labour had “crashed the car”, that Pa Broon was single-handedly responsible for the 2008 financial crisis. It wasn’t true, the economy was recovering, but instead those same Lib Dems then joined the Tories in inflicting years of needless austerity on us. 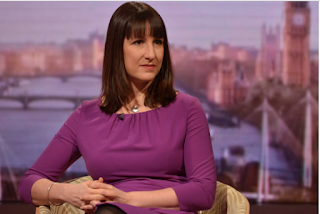 After the austerity, we were then told that this was all the fault of the dastardly EU, and hence the referendum result. The electorate wanted someone to kick, were duly told it was all those people who talk foreign, and voted accordingly. This, too, was not true. The EU didn’t make things difficult for ordinary working people, and nor, largely, did EU migrants. Now, clueless Labour politicians are joining in with this new conventional wisdom.

And they do not come more clueless than Leeds West MP Rachel Reeves, who wants everyone to know that her constituency is on the brink of civil unrest. “The other reason we have got to get this right [Brexit] is because there are bubbling tensions in this country that I just think could explode … You had those riots in 2011, the riots didn’t happen in Leeds and in my constituency, but if riots started again in Leeds and bits of my constituency - it’s like a tinder box” she told yesterday. And there was more.

“The trouble is I’m just not surprised and if we don’t get this right in terms of this response, and getting the balance right in terms of the renegotiation but also the deeper seated problems, these sort of things are just going to get worse … I worry about the economy and getting the deal right …  but I worry about the divisions in our society. Of course the referendum unleashed some of these feelings, but they are deeper seated as well”.

After Ms Reeves also said “there had been ‘three racist attacks’ in her constituency - one of which left a Polish man in hospital” I had a 1968 flashback; we’ve been here before. Blaming “others” for current and allegedly future problems? That was what Enoch Powell did in a speech which has gone down in infamy.

Ms Reeves might recognise these words: “The discrimination and the deprivation, the sense of alarm and of resentment, lies not with the immigrant population but with those among whom they have come and are still coming”. Because she is effectively saying the same thing. Never mind that Polish people are the target of attacks, it’s those who were here beforehand who are alarmed. It’s the incomers’ fault.

Enoch Powell was sacked from the opposition front bench for his intervention. The least that Rachel Reeves should do is to consider her position, and her language. If you’re going to play the blame game, just make sure you aim at the right target first.
Posted by Tim Fenton at 10:32

A racist politician in Britain?

Who would have thought it?

If her point is "lots of people are worried about immigration", then she's, well, not wrong. Lots of people are. But going from that to say "we need to end freedom of movement" is amazingly stupid. It plays into the racists hands, feeds xenophobia and tells people that they are right to be worried about "foreign types coming over here and stealing our jobs". She should be telling them about the virtues of freedom of movement, not bending to the beliefs of UKIP.

While most people will tell you they’re anti-immigration, they flinch at attempts to get “tough” such as the Gurkhas affair and the racist vans. Most will be turned off or left cold by this new rhetoric from people that, as you point out, it sounds implausible and silly coming from.

What happens to erstwhile UKIP voters and people who could given the right circumstances become UKIP voters but who just about got Labour MPs over the line in 2015 is unknown. The referendum further alienated these types. It seems the northern section of UKIP have split from the southerners because the latter support Tedious Theresa and the former are just as alienated as ever, especially since virtually none of the children of the “left behind” “white working class” would get into grammar school, and the even if realities of the situation are different, people here in Stoke-on-Trent North will be alienated in a way UKIP can’t address because they agree with this policy, unpopular in strongholds of working-class Brexshitters.

Living here it’s undeniable that a sort of Paul Nuttall, John Bickley-esque force that combines racism with socialism but doesn’t have the same rancid connotations as the BNP could win millions of votes and even under our electoral system dozens of seats.

The question we face is whether Russia-loving Diane James can appeal to such people. Personally I think she can’t, and welcome the fact since huge damage could have been done by someone who appealed to the “welfare chauvinist” tendency. I foresee people that Farrago enthused dropping out of politics if northern or becoming Tories if southern, a process that’s likely to lead to further hollowing out of politics, but we’ll have to wait and see about that.

More evidence that the Daily Mail can rely on useful idiots to make their case.

You can't "...combine racism with socialism..."

Anyone who says they have made such a combination is a fool or a liar.

Not strictly, no. But there will be a fair chunk of the British public who will think the rich should be taxed more, who want money given to schools and hospitals, who think that nurses aren't paid enough, who believe in universal health care, but who also believe that the country is just "too full" and that immigration is making it hard for "regular" folks to get jobs.


People can use doublethink to amazing degrees, sometimes.

There will have been people in the past who voted Labour despite them being less obviously racist than the Tories, rather than because of it. The question for Labour (and, indeed, any party), is how much do you try and draw these people without alienating the others who are firmly against such thoughts.


Telling people "you are wrong and an idiot for believing all that immigration rhetoric" just causes people to put up their defensive shields. You have to say you understand their views but convince them that they are wrong. And that is bloody hard to do.

I am always reminded by events like this of Dara O Briain's sketch about how while inci0dences of zombie attacks remain nil, fear of zombies is at a high and so we ought to do something about zombies... or maybe not..

This racist muck really gathered pace after Powell thought he could pitch for power by using racism as a "step up." He fled to Northern Ireland sectarianism when it rebounded on him good style, and largely because we then had at least some journalists who were sickened by his behaviour and said so. There was also natural revulsion against South African and US apartheid.

But that was fifty years ago and times have changed for the worse in this country. We now have far right propagandists who espouse hatred in the guise of "widespread fears," who actively encourage it (see for example Kelvin McFilth ad infinitum) as an easy way to appeal to the lowest common denominator in sales.

Of course it didn't stop there, it expanded into other areas of British "culture" as it was bound to. The poison was poured into everything, including broadcast news - where it was much more subtly delivered through editing techniques, particularly on TV: Which is why so few of the very worst perpetrators get relatively less exposure. Racist fanatics tend to look and sound even worse in visual and sound media - another reason print propaganda is on its way out.

Anyone who thinks currying favour with these people will work need only consult the Blair-Brown grovelling to Murdoch and the resulting disaster of thirteen years of craven surrender government. A government equally responsible for the warmongering horrors and mass murders of innocent peoples and their societies, to say nothing of continuing and worsening tory policies. A government now rightly despised for its cowardice.

So much for "winning elections" by grovelling to media spivs and cowards. In the end all it does is make YOU a groveller and a coward. And in Blair-Brown's case, mass murderers and war criminals.