Rupe’s downmarket troops at the Super Soaraway Currant Bun have churned out some questionable stuff on the EU, and especially when cheerleading for a vote to leave, but the paper’s talking up of the post-result world has taken not just the biscuit, but the whole packet. Taking pride of place in the pantheon of misinformation has been today’s editorial, a genuine example of the blind being led by the, er, blind. 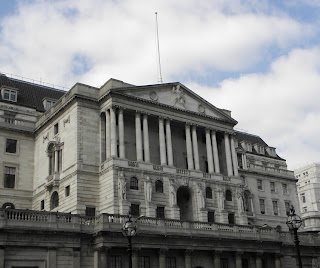 Readers have been regaled by the headline “THE SUN SAYS Post Brexit Britain just keeps getting better as we get another dose of economic cheer” before being informed that “Bank of England interest rates have bounced back with a massive rise”. Wait, what? There has been a change in the Bank of England base rate? Strangely, no-one seems to have told the, er, Bank of England, who say the interest rate is as before.

But do go on. “YET another dose of economic cheer arrives to silence the dismal chuntering of routed Remainers … How chipper they were when manufacturing had a post-referendum wobble in July and the Bank of England’s europhile boss hastily cut interest rates with a smug ‘told you so’ look”. Yes, interest rates were cut to just 0.25%, and they have remained at that level. The BoE website confirms this. 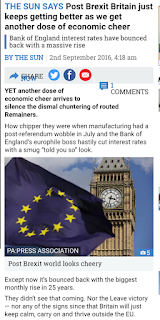 Not that the Sun is taking any notice. “Except now it’s bounced back with the biggest monthly rise in 25 years … They didn’t see that coming. Nor the Leave victory - nor any of the signs since that Britain will just keep calm, carry on and thrive outside the EU … If only Remainers had positive news from Brussels to talk up. There is none”.

And there was yet more: “Britain is not out of the woods. Perhaps not yet even in the woods. But we have so far shown typical good sense … Voters laughed off David Cameron’s scares, as powerful in turning waverers towards Leave as Boris Johnson’s oratory … One voice was still pathetically protesting against the tide of history yesterday … Tony Blair, in French, claimed Britain might U-turn at a second referendum … He once had a winning understanding of voters. Hard to imagine now”. 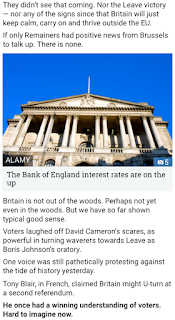 What is rather more hard to imagine is how a newspaper staffed by allegedly intelligent human beings can make such an elementary howler: what the Sun is cheering is Sterling having a better day - just the one so far, mind - on the Foreign Exchanges. So the Murdoch doggies are talking about an improvement in the exchange rate - which is most certainly not the same thing as the Bank of England interest rate.

Moreover, right now Sterling is trading at $1.33 and €1.19 - both well below the level in June, just before the referendum result was announced. So very little cheer for all those expats who are paid in Sterling, or anyone venturing outside the UK for holidays or business. All that the Sun has shown is that their hacks are so keen to do Creepy Uncle Rupe’s bidding, they can’t be bothered to do the most elementary of fact checks.

Interest rates and exchange rates are not the same thing. What a bunch of clowns.
Posted by Tim Fenton at 15:52

Seems almost churlish to remind these muppets that we are, surprise,surprise, still in the EU.

One third of the electorate, in a national frenzy of self-harm, voted for an EU exit in an advisory referendum.

That's all. Anything happening now (and most is of a negative trend) is whilst we are still an EU member. A position unlikely to change for at least 3 years.

So, dummies, Post-Brexit Britain only exists in the minds of some people. Factually, any reference should be to Post-Referendum Britain.

It's very clumsily worded but it is manufacturing to which they are referring. This is at a 10 month high, with the biggest monthly increase for 25 years. Still a surge in orders following a drop of c. 15% in the value of Sterling may not be too much of a surprise; maybe that was the secret Brexit plan all along?

Suspect qualitive easing together with lower bank rate has helped a bit too. The biggest monthly increase in manufacturing orders also follows all those months of stagnation due to the uncertainty leading up to the rerendum. Now we know nothing much is going to happen in the near, and possibly medium term, business can plan for a while and prepare for brexit for perhaps a longer time than they thought they might have had previously.