Once again, the desperation of increasingly stretched Telegraph hacks and an editorial line that requires the elevation of every scrap of anti-EU sentiment to the level of serious discussion have come together to give readers another slice of hokum as they are told - with a straight face - “Shoppers want fruit and veg in pounds and ounces”. This story carries the by-line of “Chief political correspondent” Christopher “No” Hope. 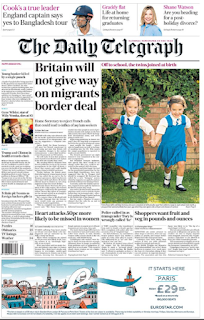 Ignoring for the time being all those shoppers who are already buying their fruit and veg not in pounds and ounces from Asda, Tesco, Sainsbury’s, Morrisons, Waitrose, Aldi, Lidl, the Co-Op, and even the local farm shop, this story is total crap. Let’s have a look at Hope’s excuse note in more detail to see why.

“Ministers are under pressure to allow shops to sell meat, fruit and vegetables in pounds and ounces ahead of Britain leaving the European Union … Customers have been asking shop owners if they can have groceries weighed in pounds and ounces rather than grams and kilograms ahead of Brexit … The British Weights and Measures Association said that ‘one or two’ shops had been in contact every week since the June 23 referendum asking if they can sell produce in imperial measurements”. And that’s it.

It gets worse: shops can already sell produce in imperial measurements. But the scales on which that produce is weighed have to be metric ones, with the imperial measurement a conversion from the equivalent metric. This is just pandering to the Tel’s oldest voters, as is “The requirement to display in metric should end when Britain repeals the European Communities Act 1972 and formally leaves the European Union”.

So is the flagrant dishonesty, like flat earth MP Peter Bone being allowed to get away with “our biggest trading partner by a mile - the United States - is still on imperial measurements”. Our biggest trading partner, by a mile, is the rest of the EU. The USA is in a minority of one when it comes to retaining imperial measurements, and even then, some of those used Stateside do not match the UK equivalent (like gallons).

That does not stop the paper backing up Hope’s hopeful copy with an editorial which perpetuates the dishonest claim “Because Britain is still, for now, an EU member, our laws forbid traders to sell goods measured solely in pounds and ounces” and then tells readers “The EU demands the metric scale be used, regardless of the fact that many British shoppers still think in imperial measures - including many of the younger generation”.

Er, the “younger generation” weren’t taught imperial at school, so how does the Tel figure that one out? You’ll love his slice of idiocy: “The customers of fast-food chains have grown up ordering their burgers by the quarter-pound, not in 113-gram servings”. Just f*** right off. I mean, seriously, just f*** off and then f*** off some more. It’s a product name, for Christ’s sake. Like a Whopper or Big Mac. Or a Telegraph bumper shit bucket.

Seriously, Telegraph hacks, try to make the excuses look convincing. Because this isn’t.

[PS desperate Telegraph executives - looks even worse running Europhobic rubbish like that when you’ve got a honking great Eurostar ad at the foot of the page teasing cheap trips to Paris]
Posted by Tim Fenton at 09:37

Reminds me of cricketing days when the most numerous requests were for the "telegraph" (for newer readers aka scoreboard) to be kept up to date.

It seems the Telegraph would be to happy to go back to the dark ages of those John Major days redolent of warm beer etc etc. The cutting edge of back to the future and all that.

Personally I always demand that my quarter-pounder be weighed in front of me.

In the mid-19th century a Royal Commission recommended the UK adopt the metric system.

Fast forward one century to my education in the mid-1960s, when my science and maths education was either metric or used both systems.

Given that decimal currency was introduced relatively painlessly in 1971, one has to wonder why are the Brits so frightened of counting in tens and hundreds where weights and measures are concerned?

Nearly every shop I know that sells mainly "lose", such as the butchers, veg, and sweet(1) shop all weigh in both... the only point its firmly "metric" is on the electronically produced receipt (where given).

(1) We still have a proper sweet shop, its a joy to behold for lovers of sweet treats... sadly however my teeth, or more specifically my fillings, are no longer up to the toffees or sticky items as they have the rather annoying habit of removing said fillings from said teeth!

I'm a graphic designer and produced catalogues for British companies that sold into the US. These are hi-tech, electronic components for fly-by-wire controls. The company used to produced two versions of the catalogues, one for the US markets and the other ROW, or Rest Of The World. Everything in the ROW version was in metric units, size, weight and the metric equivalent of electronic measurements. In the US version all measurements were in Imperial. One day there was a major sales conference hosted by my client in the US where electronic firms and distributors were invited to a launch of a new range of products and also the beautifully designed new catalogue. There was a Q&A session at the end and one distributor stood up and asked whether he could have the ROW version please because his clients had to convert the measurements to metric. This set off a tsunami of complaints from most people in the hall demanding the same thing. Oh, and of course the US military have been using metric system for years.

@Neil. What about gallons? One imperial gallon is equivalent to approximately 1.2 U.S. liquid gallons.

The US doesn't even use the 'Imperial' system, they use the 'US Customary' system. It has the same roots as Imperial but has diverged somewhat. A similar older, isolationist and exceptionalist generation refuses to let it go.

I'm always amazed at the Express's insistence on using fahrneheit. Hardly anyone in my office has the faintest idea how to measure temperature using fahrenheit, apart from knowing that "100" means we have a conversation about whether schools should be closed.

Who on earth only buys 1?

"Er, the “younger generation” weren’t taught imperial at school, so how does the Tel figure that one out?" -- well, it's been handed down by their parents, obviously. And although the Telegraph's evidence was badly chosen, their basic claim is true. There's some lingering interchangeability.

I doubt that anyone thinks of distances solely in km, whatever their age. The weather forecasters still use farenheit (although that's one I can't be doing with myself). Buy weed and you'll get it in eighths and quarters (but, bafflingly, cocaine and speed come in grams). Everyone knows their weight in stones, but would be hard pushed to calculate it in kilos. Same goes for height: When was the last time you head anyone described as 'one metre, 80 centimetres tall'? And so on and so on.

And of course, the clock and calendar are still pre-decimal, despite the best efforts of the French revolutionaries, so we're habituated to performing conversions all the time just to plan the month's grocery shopping. Culturally, the imperial system is still around, in bits and pieces, just waiting to be dusted off. Whether that's a good idea is another matter!

Slightly apropos: Until the late 1990s there was a pub in my home town that still took imperial currency. The prices were displayed in both systems, and the old codgers who liked Imperial kept the same ancient handed-down notes and coins in an endless loop of circulation with the bar-staff. I've no idea how well it worked, but it had (so they said) been going since decimalisation-day itself. The council got wind and stopped their caper eventually. A shame, I thought.

Clarification to previous: The calendar and clock are in fact decimal, to be totally accurate, what they are not is metric. Metric being the French innovation, but we in the UK nearly always use 'decimal' as shorthand for the period since the great changeover that took place in the early 1970s.

The above is so pedantic that I managed to bore myself while typing it, but I am willing to bet that if I hadn't then someone else would have corrected me.

I'm not sure what weather forecasters you're watching that use farenheit... Outside of the aforementioned Express, every TV weather report uses centigrade, and will maybe mention the imperial equivalent. Maybe. Our cars all use centigrade. Our phones do. Our ovens do. Temperature is one area where metric has pretty conclusively "won".

(And it's not what you meant, but I bet a lot of athletes and general runners know their pace in metric and not imperial. I know how long it takes myself to run a kilometre, but no idea about running a mile without doing maths.

Also, using stone as a weight wouldn't help us talk to our "largest trading partner" *cough* *cough* the US, which doesn't use them.

Currently on BBC iPlayer are repeats of a Michael Plain journey.
Episode 1. The Rock. 1min 37sec Michael throws a copy of the Daily Telegraph into a hotel wastepaper bin. DT Headline: "Britain 'to share Gibraltar with Spain'".
M Palin: "What terrors can the Sahara hold when it's only 300 miles from a British Homes Store?"

Only a copy of DT?

They will all be in there soon.

Along with SKY and the BBC.

They are the two biggest problems.


Good luck to the rest and don't let that creepy Oz buy you out.

When we went metric I needed a plank for a shelf.

Went to Bond and White (now the M&S in Muswell Hill) and asked for six feet of five-inch board. Was told that was no longer possible, so settled for 1m 80. The quoted price was "eighteen pence a foot".

@redfellow. So your plank was too short.

I'm not sure what weather forecasters you're watching that use farenheit... Outside of the aforementioned Express, every TV weather report uses centigrade, and will maybe mention the imperial equivalent. Maybe.

Google still provides forecasts in farenheit (I just checked, it's in the upper 70s round here!), so it's one corporate behemoth against another.

Also, the BBC weather forecast gives temps in Celsius but windspeed in MPH! So even at that national level, there are two systems in operation and it's taken for granted that we are familiar with both.

Also, using stone as a weight wouldn't help us talk to our "largest trading partner" *cough* *cough* the US, which doesn't use them.

Well, the thing is that no bugger uses any of this old nonsense, apart from Britain! That I suppose must be a big part of the attraction for the isolationist element among us.

Google gives me my temperature in celcius by default. It depends on what you've set your region to. US English will use farenheit, and lots of people won't change from that because they don't realise that there's a UK English equivalent.

And yeah, windspeed is going to be given in MPH. For some reason when they decided to go metric they skipped doing distances, so everything is miles, miles per hour, etc (unless you're at sea, for reasons that I can't be bothered learning). But yeah, you can usually switch between MPH and KM/H (and C and F for that matter). And lots know both. It's hardly as if, when Mo was running the 5K, everyone fell about screaming "I DON'T KNOW HOW LONG THAT IS HE COULD BE RUNNING FOR HOURS!?!?!!"

Regarding the final argument, the isolationist element makes sense, except that one of the "arguments" for reverting to Imperial is that it would make trading with the US easier. Even though it wouldn't. Gagh!