It is a rare moment indeed when the legendarily foul mouthed Paul Dacre and his obedient hackery at the Daily Mail throws its weight not merely behind a Labour Party politician, but one who has been an unswerving supporter of press regulation reform and the process put in train in the wake of the Leveson Inquiry. But that is what has happened today, as the Mail has made common cause with Labour’s deputy leader Tom Watson. 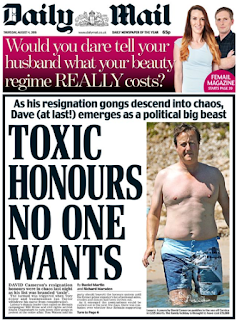 Behind the Mail’s front page splash today, which told readers “As his resignation gongs descend into chaos, Dave (at last!) emerges as a political big beast … TOXIC HONOURS NO ONE WANTS”, with a photo of Young Dave in a state of advanced chillaxing somewhere not in the UK, comes a supporting story that shows Dacre and Watson very much on the same page - but for very different reasons.

Indeed, when Tom Watson gave the second Leveson Lecture, hosted by campaigning group Hacked Off, at One Great George Street in early December 2014, the Mail and its editor got it in the neck. It was there that, during the post-lecture discussion, businessman Andy Miller stood up and described how the paper had libelled him in another of those front page splashes, and that he had had to drag it to court to obtain redress.

It was estimated that Miller’s action against the Mail, which need not have happened had Dacre taken a reasonable line in responding to the original complaint, had cost the paper around £3 million. So why is the same paper now backing Watson so keenly? Ah well. That is because honours are a touchy subject at Northcliffe House.

The Mail loves to give its front page over to periodic denunciations of the honours system, and for one reason, and one alone: Dacre believes that he merits one, and whenever the list for the Queen’s Birthday Honours, or New Year Honours, is revealed, he is never on it. His predecessor David English got a K, and dammit, his occasional columnist Max “Hitler” Hastings got one. The Vagina Monologue must therefore have one, too.

Hence the storyline “David Cameron’s resignation honours were in chaos last night as his list was branded ‘toxic’ … Labour’s deputy leader then called on Remain campaigner Will Straw and civil rights activist Shami Chakrabarti to turn down their gongs in protest at the entire affair … Tom Watson said his party should boycott the honours system until the former prime minister’s list of personal aides, cronies and donors had been thrown out”.

That was supported by a suitably thundering Daily Mail Comment, telling “Honours are turning into badges of shame”. But, as the Guardian’s Michael White observed recently, other Prime Ministerial resignation honours lists have raised eyebrows, not least Harold Wilson’s “lavender list” in 1976. Perhaps part of the hooha about Cameron’s is that both Tone and Pa Broon gave this particular Prime Ministerial privilege a miss.

Whatever the reason, it is surely that most unusual event to see the editor of the Daily Mail presenting a united front with a Hacked Off supporter. One for the diary, folks.
Posted by Tim Fenton at 09:53

As for Tom Watson......his open contempt for the Murdoch mafia is beginning to lose its appeal if he finds himself in the same space as Dacre. If I was Watson, I'd immediately tell the Daily Heil mouthpiece to shove off.

Cameron? The biggest waste of space even the tories could dig up. Mind you judgement is suspended on the Vicar's Daughter - but she does look like she'll give the Bullingdon Pig's Head Boy more than a run for his Cayman Islands stake.