Hard on the heels of yesterday’s result in the ballot of Labour Party members to decide who went forward as the party’s candidate for Mayor of Greater Manchester, won decisively by Leigh MP and former Minister Andy Burnham, is the result of a similar process to select the nominee for Mayor of Merseyside. And again, the contest has pitched the local Labour establishment against two MPs. 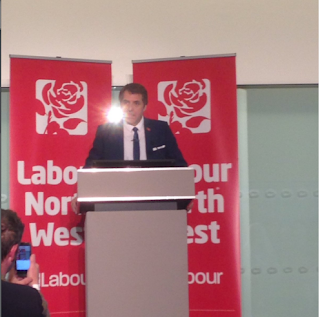 Joe Anderson, long-serving Mayor of Liverpool, had put his name forward for the new and rather more demanding job, but his challengers, Luciana Berger, who represents Liverpool’s Wavertree constituency, and Steve Rotheram, who represents Liverpool Walton, have been the more impressive. Rotheram is well-known on Merseyside for his steadfast support for the relatives of the 96 who died at Hillsborough.

In this, there is a parallel with Rotheram’s good friend Burnham, whose support for the campaign to secure Justice For The 96 was invaluable in helping to drive the campaign forward. It showed the outside world how team rivalries - Burnham is an Evertonian, and Rotheram a Liverpool fan - have been transcended by a sense of solidarity and community, a standing together in the face of establishment denial.

The Merseyside Mayor will be another example of how Labour is, whatever one’s view of Jeremy Corbyn’s leadership, managing to engage in local and regional politics through the efforts of popular local candidates, from Sadiq Khan in London to nominees Sion Simon in the West Midlands and Burnham in Greater Manchester. And now to this number has been added the highly deserving figure of Steve Rotheram.

Like Burnham yesterday in Manchester, there was little need to stand on ceremony: Rotheram was a clear winner. Joe Anderson had finally run out of road, not helped by his closeness to the likes of (still) nominally Labour MP Simon Danczuk, who is now a central participant in his own soap opera. Luciana Berger has been a sound campaigner on issues likes press regulation, but her resignation from the Shadow Cabinet may have cost her support. Rotheram will be a shoo-in for election next year.

The national leadership of the Labour Party may have its Little Local Difficulties. But the potential regional power bases augur well for the future. Well done Steve Rotheram.
Posted by Tim Fenton at 10:24

What a pity the New Labour mob don't have the same sense of solidarity and community that Merseyside has.

Which is why the embarrassment that is Joe Anderson has been binned as soon as it became obvious he was quite prepared to do tory and New Labour dirty work for them.

Incidentally, last night on C4 News Sam Tarry destroyed McTernan in an in-your-face item. He did it by simply pointing out that McTernan's notion of "electability" had led to the loss of Scottish Labour and the Australian version, both of them "advised" by said McTernan - as were the last two UK general election campaigns. By the time Tarry had finished with him McTernan looked as though he'd just had a new orifice reamed in him with a broken bottle. Haven't laughed so much since the last time McTernan made a complete arse head of himself, which was just a couple of days ago......Play it again, Sam.

Good news all round. That Burnham and Rotheram are so close should be good for the North West more generally, given the traditional hostility between Liverpool and Manchester.

You forgot the new Mayor of Brizzol Tim.

All this localism must be striking real fear into the hearts of those MPs, chosen by a cabal of New Labour architects and parachuted into safe seats in that obscure "North".