During the recent spell of occasionally very warm weather - particularly in the South East of England - there have been several incidents where people have been drowned after getting into difficulties in the sea. It may be warm on land, but the seas around Britain’s shores are cold even in late August, and colder the further from the beach that you go. There are also tricky tides and currents to consider. 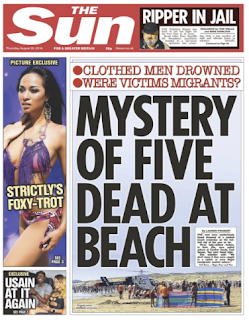 One location that had already seen a drowning this summer was Camber Sands in East Sussex, an area of dunes and gently shelving beaches popular with day trippers and holidaymakers. Although the water is shallow for some way out to sea, there are potentially lethal riptides. These could have claimed the lives of five men who drowned off the beach yesterday. But the Super Soaraway Currant Bun had other ideas.

“Clothed men drowned … Were victims migrants? MYSTERY OF FIVE DEAD AT BEACH” is today’s Sun front page lead, and it’s backed up by the usual presence of “An onlooker” - that’s someone who was looking on from the safety of the Baby Shard bunker - to tell readers “We don’t know if they were caught in a riptide or were illegal immigrants washed ashore”. Yeah, Sun readers, they’re illegal and they’re coming here!

There was more in the same vein: “One theory was that they drowned after being dragged out to sea by a riptide, which has caused deaths there in the past … But the beach has relatively shallow water and was said to be calm yesterday afternoon … Witnesses said the first three men were fully clothed and did not appear to have any family or friends on the beach with them … It led to speculation the victims could be illegal immigrants”.

That would be speculation in the Sun in order to frighten readers and flog a few more papers, then. Also, added to the accounts of real witnesses, the Sun has conjured up “Another witness” - that’s someone else in the Sun newsroom - to stir the pot a little more, with “They had all their clothes on - shorts and T-shirts … We found it quite odd because we didn’t see any family or anything for them on the beach”.

But enough: this is the Guardian’s report of the same incident: “Beachgoers and emergency services tried to save three of the men after they got into difficulties in the water at Camber Sands near Rye, East Sussex, at around 2.15pm on Wednesday. They were pulled from the sea within 20 minutes but died … Two more bodies were found at around 8pm as the tide”. And then the confirmation from the Police.

“Suggestions that the deaths may be linked to jellyfish have been ruled out and Sussex police said there was nothing to suggest the men were migrants”. That article also tells “According to figures released by the Royal National Lifeboat Institution as part of its ongoing Respect the Water campaign, 168 people drowned accidentally in the UK’s tidal waters last year”. 168 tragic deaths. Those off Camber Sands are five more.

But for the Murdoch doggies, they can be categorised as “Migrants” and used to generate more clicks and sales. High principles, eh? Pass the sick bucket.

[UPDATE 1110 hours: as the Evening Standard has now confirmed, the five dead men were day trippers from the London area. 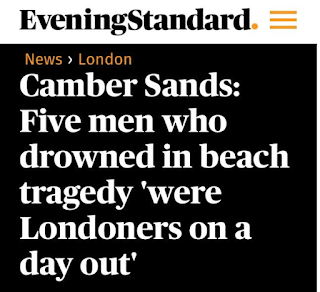 "The five men who drowned in the sea at Camber Sands were Londoners enjoying a day out at the beach, it emerged today ... The group, believed to be in their late teens and early 20s, had travelled to the popular holiday spot from the capital yesterday to enjoy the hottest day of the year ... It comes after speculation that the group may have been migrants" tells the paper.

So that's the Sun's front page frightener shot down in flames, almost as soon as it hit the news stands. Way to go, Murdoch clowns]
Posted by Tim Fenton at 10:34

Confirmed now that they were five day trippers from London, not fully clothed but actually dressed for the beach - but it all feeds the narrative doesn't it, just like Katie Hopkins's 'poll' on Twitter about it

Five men sadly died at Camber Sands yesterday (Wednesday 24 August). We believe we now know who the men are and that they came to the beach together for the day. We believe they are all in their late teens and early 20s and come from the Greater London area. These men were not fully clothed when they were pulled from the sea but wearing clothes appropriate for being at the beach for the day.

What is the appropriate attire for a beach ?

The Sun got their "story" out there before the full facts were known and thus were able to nuance it so that it gave their readers "want they want to hear".

Probably deliberately to mislead. Nothing new there then.

Just like the 2011 Norway massacre went from "Jihadists" to "Jihadi-inspired" to "motivated by concerns about immigration, particularly from...".

Even if they backtrack, they'll just say they were raising "perfectly legitimate concerns".

It was phrased as a question, and it was a possibility. Migrants have drowned in the Med, and a few rescued in the Channel after attempting the crossing in unsuitable vessels.

Nothing at all racist in speculating that they might be migrants.

But there definitely is a diversity issue if all the paper talks about is how migrants are infiltrating our society and eating swans (not that they are, this is just an illustration, a poor one I'll admit)

Some of the comments on the Sun's follow up article are stupid to say the least. One says "as Sri Lanka is an island nation I would have thought that everyone knows how to swim"

Just like the UK is an island nation and we all now that 100% of the residents now how to swim!

Yep, sticking to the facts when five young men drown is not good enough. There has to be the obligatory speculation about nationality and last country of residence before the authorities issue a statement.