While the Labour Party considers the case against Rochdale MP Simon Danczuk, following the revelation that he had been caught “sexting” a 17-year-old girl, the Super Soaraway Currant Bun has been in something of a bind. Danczuk is useful as a way of flogging newspapers, but some of the stories about his propensity for chasing younger women were becoming too good for the Murdoch doggies to pass up. 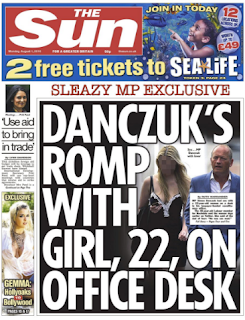 And so it came to pass that the Sun eventually bit on the bait: there had been Danczuk’s barely concealed affection for Tory Councillor Louise Dickens, herself more than 20 years his junior, and a most unfortunate incident that happened late one night in the Flying Horse pub in central Rochdale, which was only kept out of the papers because the manager declined to make a statement, but today has brought the coup de grace.

The front page headline was all one might expect: “Sleazy MP Exclusive … DANCZUK’S ROMP WITH GIRL, 22, ON OFFICE DESK”. Why the Sun has to use words like “Romp” when we all know it is referring to sexual intercourse, is mystifying. But, as Sir Sean nearly said, I think we got the point. Danczuk is so busy with being an MP that he has sufficient time to trawl social media on the off-chance of pulling.

So what of the tawdry detail of this encounter? “MP Simon Danczuk had sex with a 22-year-old woman on a desk in his taxpayer-funded constituency office … The 49-year-old Labour member for Rochdale met the woman days earlier on Twitter … Danczuk had a spanking session and sex with the young woman just days after meeting her online”. Cue lots of Fnarr and Spab inducing talk of “Upstanding members”. Yik. Kersnick.

But do go on. “After agreeing to a date, he invited Alice to stay at his London flat and Spanish villa”. Yes, the usual spiel. But there’s more: “They romped after sinking two bottles of wine at a pub … The following day the pair met again for sex at the five-star Lowry Hotel in Manchester”. Where there just happened to be someone to photograph the couple together and later cause the photo to be made available to the Sun.

And there was yet more: “Danczuk also had sex with Alice at the London home he used to share with wife Karen, while his children slept in the next room”. Enough already. Yes, this article has helped the Murdoch mafiosi shift a few more copies of the Sun today, but at least one of those copies will have ended up with someone on Labour’s NEC, the body which is considering whether to expel Danczuk from the party.

That the MP used his constituency office - paid for by we, the taxpayers - for a casual sexual encounter, and then used his Pimlico flat - also paid for by the taxpayers - for an encore, is enough to ensure that any doubt over his expulsion can be put to one side. When the Parliamentary seat of Rochdale is next contested in an election, the Labour candidate will not be Simon Danczuk. This story is the last nail in his career coffin.

Yes, there goes Simon Danczuk, aka Spanker Si, on his way … out.
Posted by Tim Fenton at 09:56

Stand by for sad Simon's tears on LBC Radio and Channel 4 News, as well as Victoria Derbyshire and maybe even Newsnight, if Si is lucky.

We know Simon expensed the tissues, but did he expense the french letters?

I must say I fell about laughing at the notion of Danksuck coupling with a tory councillor. A marriage made in in appropriatana if ever there was one.

It reminded of a friend of mine some years ago. He was secretary of the local Communist Party (total membership 20, of whom probably 18 were plants). One Saturday night he managed to get the female secretary of the local tories into the sack. Then when he got her to the Glorious Inescapable Moment he told her he was a rabid Commie. Exit friend in his (then fashionable) Calvin Kleins laughing his, er, sock off.

Not, I hasten to add, that I'm accusing said Danksuck of being a Commie. Perish the thought. On the contrary he sounds like your standard capitalist out for a peak profit. If you see what I mean.