Simon Danczuk Through The Keyhole

Unfortunately, the Zelo Street budget doesn’t extend to securing the services of Gross Loydman, so you’ll have to imagine the English language being systematically and slowly mangled as we bring you a special edition of Through The Keyhole. Aaand today, Through The Keyhole is visiting a town in the North of England to ask questions like “Just who might want to live in a house like this”. Our cameras - well, only one camera, actually - have travelled all the way up the Motorway and through the city of Manchester to the town of Rochdale, nestling in the foothills of the Pennines, where we find ourselves in a quiet suburban street lined with houses and bungalows. Hey, did I just say bungalow? Hold on to that one, we might use it later. There are trees and hedges. There are lots of parked cars.

Now who might park their car on this quiet suburban street? We-e-e-ell, there are BMW owners, Audi drivers, residents with people carriers and 4*4s … and the owner of this little Fiat 500. They all park their cars there. Who might drive a little car like this? What kind of washed-up Z-list not-really-a-celebrity and disgraced politician might drive around Rochdale in a Fiat 500 which his ex-wife allegedly bought for him? 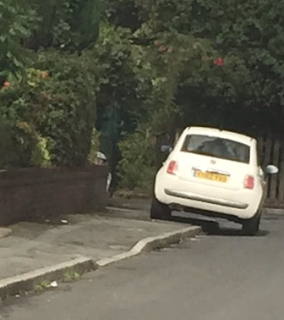 We-e-e-ell, this Fiat 500 is owned by Simon Danczuk, Rochdale’s nominally Labour MP, although he is suspended from the party and faces expulsion. But why is his car parked there? What kind of house owner would allow Simon Danczuk not only to park outside, but actually live in the property? What kind of hypocritical Z-list wannabe might let Spanker Si into her house, or perhaps I should say her bungalow?

Yes, less than a week after Danczuk was sprung from choky in Spain by the decision of ex-wife Karen not to press charges following an apparently violent domestic at their place in Algorfa, his car is parked outside Kazza’s bungalow and the curtains are drawn. What kind of money-grabbing nobody tells the press “I thought he was going to kill me … I know I’m going to be scarred for life” and then lets him use her place in Rochdale? 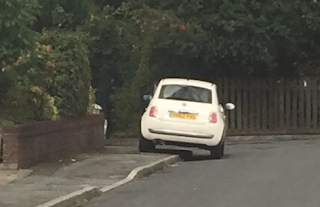 What kind of person says “I will never be able to forget it … It was as though I was paralysed with fear … I just stood there … The last thing I remember is him kicking and shouting, ‘Let me in’ … I woke up in a pool of blood and thought, ‘I’m going to die’ … He has troubles - he needs to sort them out … I feel sad …  my ex-husband, a man I thought was my friend - has done this to me … And the boys - their dad did this to their mum” and then gives that same bloke free run of her bungalow?

What kind of person tells the press “Apart from the boys, I’m no longer part of Simon’s life … Enough is enough … He has troubles, he needs to sort them out but I won’t be helping … He’s had too many chances, this is the final straw … I will struggle to forgive him … I realise he could have killed me” and then lets him in the front door?

Welcome to the dysfunctional and wacky world of Spanker Si and wannabe Kazza. And that’s all from this special Through The Keyhole - we now return you to reality.
Posted by Tim Fenton at 16:06

Perhaps in reality it is Simon's bungalow? Though he owns a different house in Rochdale, that is occupied by A N Other.

Or deep cleaning THAT sofa? The one costing six grand? (No it didn't.)

Was the stew he tweeted a photo of Sunday cooked on Kazza's cooker? Hope he wasn't boiling bunnies, or pusses?

Can't be, can it, that he creeps over back gardens to live part time in the bungalow when he's not in his taxpayer over funded place in London or his gaff in Spain? Simon Danczuk, man of the people... of several abodes, but none of them fixed?

They are probably planning the next episode of their sad lives which will no doubt be aired in public.

It's illegal and very anti social to park on the pavement. Says it all really.

As Ann says, anti-social to park like that and extremely thoughtless. If you, as I often do, wheel a pal in a wheel chair along the footpath the way that car is parked becomes a real problem negotiating around it especially on what looks like a rocky asphalt footpath and a driver like that is just the sort if you touch his motor comes out screaming and cursing. Ant-social indeed. Why is this pic not on the front of the Daily Mail?

I should add that thankfully I live nowhere near Rochdale where such despicable anti-social behavior takes place but surely this is the sort of matter the local MP would go into battle on behalf of disabled pensioners in wheelchairs unable to negotiate the footpath because of a selfish car owner hogging the footpath. Does anyone perchance know who the local MP is?