When singer Stephen Gately died at the age of 33, the Daily Mail’s Glenda Cattia Maxima Jan Moir ignored the inconvenient fact that the cause of his death was a congenital heart defect, and instead wrote of “A strange, lonely and troubling death”, going on to claim “Whatever the cause of death is, it is not, by any yardstick, a natural one … the circumstances … are more than a little sleazy”. Why? Because Gately was gay. 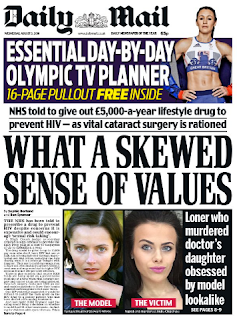 The iron code of the Mail dictates that there is something not quite right about those who are not heterosexual, and appropriately married with children, with women not being able to have it all. Those who transgress can expect the moral outrage of the Vagina Monologue to rain down upon them like so much biblical damnation.

Nothing has changed in this tight-laced worldview in the intervening seven years, and so it should have surprised no-one when yesterday’s Mail front page splash told readers “NHS told to give out £5,000-a-year lifestyle drug to prevent HIV - as vital cataract surgery is rationed … WHAT A SKEWED SENSE OF VALUES”. The message was clear: gay people were being given something which stopped others getting treatment.

Moreover, the online article’s headline, “NHS fights back against ruling forcing it to hand out 'promiscuity pill' that prevents HIV as the £20m cost will hit its ability to treat cancer and give limbs to amputees” was even nastier. Daily Mail Comment backed this up, telling “Common sense over NHS funding needed”. The idea that being gay is some kind of lifestyle choice generated significant adverse comment.

Oliver Duff of i pointed out “Beware moralising about ‘lifestyle choices’ - we hear these arguments on abortion. Roughly 6,000 people test positive for HIV in Britain every year. About half of them are gay or bisexual men. Prep reduces the risk of HIV infection by 86 per cent. Imagine the headlines if we had a drug that could do that to any cancer”.

Paul Twocock, in a Guardian Comment Is Free piece, mused “Reading some of the coverage around the high court decision on PrEP felt like going back to the dark old days of the 1980s, where any and all coverage of gay and bi men was negative, scrutinising and alienating”. Pink News reported “The Daily Mail has been accused of perpetuating stigma, after a report branded HIV-preventing meds as ‘lifestyle drugs’ representing ‘skewed values’”. What was the Mail to do? Simples. Order a gay pundit over the top.

You think I jest? Right on cue this morning has come Andrew Pierce to tell Mail readers “Why I, as a gay man, think this is morally wrong … Thankfully, the development of antiretroviral drugs since the 1980s has led to a dramatic fall in the number of Aids deaths.
But, most worryingly, it has created a reckless mindset among many gay people that makes them think that they can indulge in any kind of sexual behaviour … One of the effects of this is that, increasingly, they are indulging in unprotected sex and then expecting the NHS to prescribe them a drug that is designed to prevent them from getting HIV”. And there was more. Rather a lot more.

“To put it bluntly: gays are being given scarce taxpayer-funded NHS resources for a lifestyle drug which could encourage sexual risk-taking when those suffering from cataracts, sick children and cancer-sufferers face rationing of their treatments … the case of this gay lifestyle drug … Significantly, gays wanting the drug in the US have to pay for it themselves … I’m afraid the truth is that those gays clamouring for free PrEP do so because they want to have risky, unprotective sex … Of course, some more militant gays will argue that in a free country, they are entitled to take risks with their own lives … True, but not at the cost of others whose health problems are not self-inflicted”.

It’s almost as if Paul Dacre stood over Pierce while he wrote that. The column is so close to the line taken yesterday by the Mail that it seems unconscionable that anyone of independent thought could have written it - not without a little encouragement.

In the strange world of the Mail, a treatment that reduces significantly the risk of contracting HIV is a “gay lifestyle drug”, despite half the number who test positive for the condition not being gay or bisexual. Those who oppose the Mail are “militant gays” who indulge in, or at least support “risky, unprotected sex”, their subsequent problems therefore being “self-inflicted”. And they should all feel guilty about denying all those who are not gay their treatments for a number of ailments that the Mail has just dreamed up.

It’s sad that the Mail is as judgmental about homosexuality as it was all those years ago. It’s even sadder that the paper can so easily coerce its pundits to write what it tells them.
Posted by Tim Fenton at 12:57

"Significantly, gays wanting the drug in the US have to pay for it themselves"
Well yes. There is no NHS there.
He has previous too.

"Why Britain doesn't need gay marriage: First MP to have a civil partnership makes a brave and controversial stand"
http://www.dailymail.co.uk/news/article-2129479

"Why gay weddings do NOT advance the cause of equality"
http://www.dailymail.co.uk/femail/article-2592049

Each passing day has the Daily Heil looking and sounding like a loony combo of seventeenth century Scottish Presbyterianism, Saudi Wahabism, the Vatican and the crackpot Dixie Bible Belt.

There’s no talking to people who can’t get it through their heads that consensual sexual behaviour in private has (excuse the pun) bugger all to do with anyone else. If anything’s “sleazy” it’s the Daily Heil loopy obsolescent obsession with other people’s sex lives. While of course happily publishing pictures of scantily dressed raunchy gals and fat ex-prime ministers, and hacking private phones.

Nor does it dawn on them that withholding medical treatment because of someone’s life choices would have to extend to alcoholics, drug addicts, obesity, industrial disease and injury – and for that matter the psychological damage caused by reading the Heil......Hell, why not just let all the bastards die?

I happen to be heterosexual and completely averse to homosexual practices of any kind. Just as, I am sure (excuse the second pun), it’s vice versa. So what?......I can’t stand Jimmy Carr either, but I don’t want the cockney moron banned. I neither pay for his concerts or watch him on TV or listen to him on radio.

In the end the only thing that matters is that two people love each other or are ready to settle for each other’s company or mutual sensuality. It’s harmless enough, but obviously way beyond Dacre and his divvies.

PrEP's not particularly cheap (or not until it goes generic in a few years time) but what small fraction of the potential userbase would have to catch HIV for that treatment to cost more than the projected £20m a year?

Andrew Pierce. The Uncle Tom of the gay world.