The controversy sparked by banning Islamic swimwear - aka the Burkini or Burqini - by women has crossed La Manche and pitted usual soulmates the Sun and Daily Mail against one another. The Mail has, to its credit, gone with the personal liberty angle, that the women should be free to choose what they wear, but the Sun is for the crackdown. 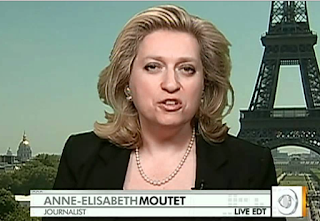 You are English types, yes?

So while the Mail tells readers “The French ban on the burkini is threatening to turn into a farce as police officers armed with pepper spray and batons marched onto a beach today and ordered a woman to strip off”, the Sun has employed the services of genuine French pundit Anne-Élisabeth Moutet to counter-claim “If you’re upset by burkini cop image, you’ve have been sucked in by Islamist propaganda”. 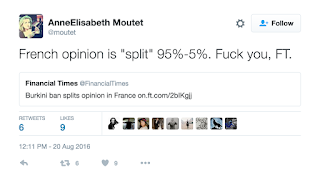 Ms Moutet’s mildly paranoid screed tells “She has no book, no sun cream, no beach bag. Her clothes are not suited to swimming … Another [photo] shows her sitting quietly, looking around, as if waiting for the police to come. Hoping for the police to come? … [The photos are] professionally shot … The photographer was there long before the incident … A belief shared by many is that this ‘victim’ and the snapper wanted the police to intervene - the photos are brilliant Islamist propaganda”. Ri-i-i-i-ght. 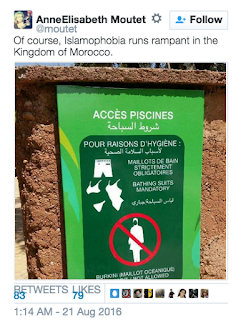 One could also posit the opposite position, that the snapper saw the woman there, knew it was a beach where the ban had been imposed, and so hung around to see what would happen when Les Gendarmes fetched up. Journalistic and professional sixth sense. 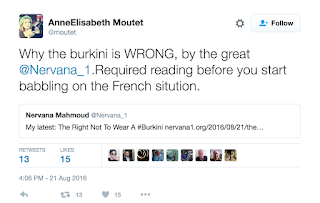 Ms Moutet is not a disinterested neutral on this. Consider her Twitter excursions: after the FT suggested opinion in France was split on the Burkini question, she sniped “French opinion is ‘split’ 95%-5%. Fuck you, FT”, before telling her followers to Look Over There: “Of course, Islamophobia runs rampant in the Kingdom of Morocco”. They did it too! 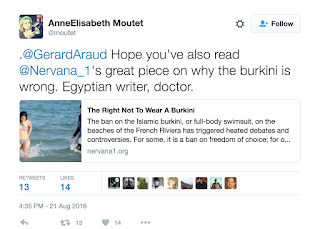 We should also Look Over There at someone who agrees with her: “Why the burkini is WRONG, by the great @Nervana_1.Required reading before you start babbling on the French sitution [sic] … Hope you've also read @Nervana_1's great piece on why the burkini is wrong. Egyptian writer, doctor”. And well-known sample of one. 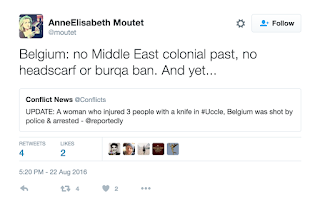 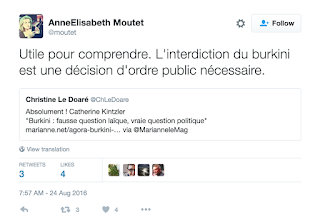 Ms Moutet was also prone to going a little Katie Hopkins: “Belgium: no Middle East colonial past, no headscarf or burqa ban. And yet…”. And yet we don’t know who did it and why. But she was firm on the Burkini ban: “Utile pour comprendre. L'interdiction du burkini est une décision d'ordre public nécessaire”. It was a public order measure; maybe all those Muslim women at the beach would get out of hand. And then came a dead giveaway. 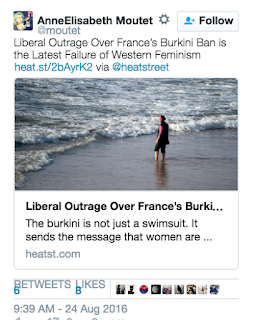 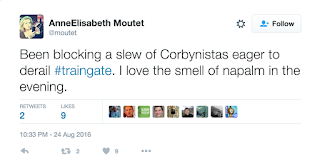 “Liberal Outrage Over France’s Burkini Ban is the Latest Failure of Western Feminism http://heat.st/2bAyrK2  via @heatstreet”. Oh dear Ms Moutet! Quoting Heat Street with a straight face. But she’s not a right-winger, no sirree: “Been blocking a slew of Corbynistas eager to derail #traingate. I love the smell of napalm in the evening”. Or maybe she is.

And that 95% was only 64%: “Poll: 64% of French reject the Burkini on our beaches. My @TheSun guest column this morning”. Then the pièce de résistance: “She came to the beach without suncream,towel, bag, book, but with a professional photographer. It was police-baiting”. As I thought: a ranting, intolerant right-winger. And bang to rights.

Amnesty International's Europe director has commented "French authorities must now drop the pretence that these measures do anything to protect the rights of women ... These bans do nothing to increase public safety but do a lot to promote public humiliation".

So it's all about the Liberté part of Liberté, Égalité, Fraternité, then. One might have expected a French journalist to understand that. Unless they were just another screaming right-winger hell-bent on spreading a little anti-Muslim prejudice, of course]

Genuine question: are nuns also banned from these beaches? If not, why not?

I have noticed Michael Crick is not adverse to using some article from shit street, often with an open ended "innocent" question... (when he should know the sodding answer because he's like a effing news guy, or summat!)

The notice is outside a privately-owned swimming pool in Morocco.

Moutet, who is an extremely sinister and strange woman (lives with two cats and has lots of social media "friends") used one of her Facebook rants to describe the unidentified Muslim woman on the beach as a "stupid cow". She was also offering the woman's thought patterns, while quoting no sources whatsoever. Moutet pretends she's a "Daily Telegraph columnist", when in fact the Torygraph is as mistrustful of her grasp of "la réalité" as everyone else, and only allows her access to their pages around four times a year, usually to write about wine (funny that). Thus her despairing emergence as a far-right Sun bully girl. Scary....Thanks for this important piece exposing the "controversial" Moutet for what she is. About time people were warned.