I am not supporting Jeremy Corbyn in his bid to retain the Labour leadership. But nor am I supporting his challenger Owen Smith. Nor am I in league with any interest group, cabal, conspiracy, or media organisation. So what you read on Zelo Street is how I see it. No other body has influence, or holds sway, over this blog. Why the need to stress this? Because, sadly, the mindset of many Corbyn followers necessitates it. 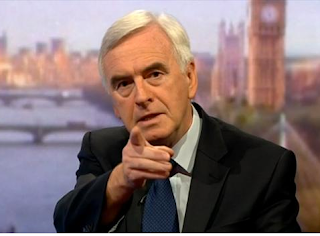 You talking about me?

Hardly a comment on Jezza goes by without complaints of bias, partiality, closet Smith support: I lose count of the “Your stuff is usually very good BUT” comments. Zelo Street has called out the press’ more ridiculous attempts to demonise Corbyn. It will also call out the more ridiculous attempts to justify his and his pals’ mis-steps. That is what freedom of speech is about - it’s not a freedom only to hear what you want to.

So we come to the latest manifestation of the Corbyn camp pulling off another “One step forward, two steps back” stunt, this one from shadow chancellor John McDonnell, usually one of Jezza’s more reliable lieutenants, who has suggested that Richard Branson should be stripped of his knighthood, because he is not currently resident in the UK, and not because of the Traingate row that involved his pal Jezza, honestly.

The Labour-supporting Mirror has put it plainly. “Labour calls for Richard Branson to be STRIPPED of his knighthood after Jeremy Corbyn Traingate row … John ­McDonnell slams the Virgin billionaire as a ‘tax exile who thinks he can try and intervene and ­undermine our democracy’”. And how has Branson intervened to undermine our democracy? God knows. But no doubt there will be a justification along soon.

And what would be the reasoning? Branson, as founder of Virgin Group, has a minority stake in the train operator that so irked Corbyn - 90% of Virgin Trains East Coast is held by Stagecoach Group. No move has yet been made to strip Stagecoach chairman Brian Souter of his knighthood, despite the latter’s past support for the Tories’ controversial “Section 28” law which banned the “promotion” of homosexuality.

Moreover, how does Traingate “undermine our democracy”? Did anyone become disenfranchised as a result? Was freedom of speech somehow curtailed? Or is a train carrying more passengers than its seating capacity deemed the ultimate mark of shame? If it is, that would disqualify the operators of every franchise awarded since the system was introduced - as well as Good Old British Rail, who did it too.

Whichever way McDonnell’s pronouncements are looked at, they do not make sense. If a future Government were to take rail franchises into public ownership, I doubt that it would fuss Branson, Souter or any of the other current participants. Sticking their bugle into that controversy is not where their heads are at. And if a future Government wanted to reform the honours system - fine, let them get elected and then get on with it.

The problem for Corbyn, McDonnell and the rest is that right now they are not going to get elected. And spare me the “look over there at Owen Smith”. Stop blaming him, stop blaming Branson, stop blaming pundits and bloggers who say you are wrong, and get real. Because without getting real, there isn’t going to be another Labour Government. Ever.
Posted by Tim Fenton at 13:19

Is the Mirror article by McDonnell edited online? He doesn't mention Branson at all. The pull quote in the preamble about 'undermining' democracy appears to be from a different interview or article.

*sigh* Corbyn supporter here who does wish some of his side would stop making my side look so incredibly stupid. Sure, some of the coverage has been way hostile, but I do wish Team Jezza would stop making it such a matter of sitting duck - meet potshot.

I'm frequent usually silent reader of your blog. Keep up the great work.

Forgetting everything about 'traingate', I'm interested in this statement of yours:
"If a future Government were to take rail franchises into public ownership, I doubt that it would fuss Branson, Souter or any of the other current participants."

But if Stagecoach owns 90% of Virgin trains, and Souter is chairman of Stagecoach, surely that's a financial dent in his personal pocket if UK rails are renationalised?

Again, I stress I don't believe (but who cares what *I* believe) that Branson got personally involved in traingate due to talked-about UK train re-nationalisation by a Labour party seemingly so heavily unlikely to get into government any time soon. I'm simply asking for clarification on why you don't think taking into public ownership oan asset Stagecoach owns 90% of, and Souter is chairman of Stagecoach, would particularly trouble Souter?

Simply because it's highly unlikely to happen? Or that Virgin trains are so small a part of Stagecoach (not to mention the fingers they have in any other train pies), that renationalisation is a flicked-away drowsy wasp?

The "asset" held by Stagecoach, Virgin or whoever is the right to run the train service.

The operators generally do not own the trains, the stations, the tracks and signals, and the staff will transfer over to the new franchise - or to a public body.

The returns aren't as great as some make out, either - typically a margin of around 3%.

You usually take a wider view Tim. now why might branson be bothering himslef to make a fuss about this during a week in which his old rival BA has been given so much air time because it carried the olympic team home from Brazil?

If your perception is true, which I doubt, then he must have been glad for Corbyn, or his staff, to have played the short of space trick at just the right time without the benefit of having the trump card?

The conspiracy theorists are overlooking one important thing about Branson's appearance on the scene - CORBYN STARTED IT!!! And Corbyn was slagging off the Virgin brand not Stagecoach who actually run the train, although he probably didn't realise that. So Branson had a right to reply which anyone else would have claimed if they had been so publicly critisiced.


As Tim correctly points out, the only dents in Branson, Souter or anyone elses pockets from privatisation will be loss of future profits, they have next to nowt tied up in capital.


For the benefit of those with opions but no knowledge:

Virgin Tains East Coast and Virgin Trans West Coast ("the originals") are seperate legal entitities each with it's own board and offices etc.

49% of West Coast was sold to Stagecoach a few years after the franchise was created, after a plan to sell that much as public shares was dropped (lack of interest?). The "InterCity West Coast" franchise was supposed to be relet at the end of 2012 but that plan went wrong when First Group were awarded it and then Branson took legal action over issues in the bidding process. It's even more complicated because that relet was clearly intended to be the final IC West Coast franchise designed to die naturally when HS2 came along. Whilst they try to sort out a new franchise Virgin have continued to operate the trains but not as a franchise, they have a management contract (which brings in MUCH less profit). Basically West Coast is a state asset being managed by a private company in return for a fee. Full nationalisation of this set up wouldn't hit Branson very hard since he currently doesn't make huge profits from it. The DfT do intend to relet the franchise, they hope in 2018 and probably for 10 years. Whoever wins that will then get a few more years of decent profits.


East Coast is basically a Stagecoach company but for some reason they seemed to think the Virgin brand was stronger so did a deal to use it in return for Virgin Group taking a 10% share. Their new trains (soon...) were specified and funded by the DfT before the franchise was let and Virgins only real input will be the colours. Theoretically East Coast should still be making good profits but it is generally felt that they bid too much and the money isn't there, which is an ongoing theme on with that franchise.


And as for airtime, once again it's only been possible because of what Corbyn did, without that stunt BA would have had a near monopoly. Although almost killing himself on holiday has bumped up Bransons quota!

That's not what the article says. Stop reading headlines. The only person he suggested should lose his knighthood is Philip Green. I don't see that as a vote loser.

It is indeed what the article says, and your bizarre demand is declined.

I wonder why, if the rail contract isn't worth anything to Branson, he took legal action over the bidding of it? Doesn't make sense to me.

Always comes down to personalising it.

And that was the West Coast, not the East Coast.