There was a stabbing incident near London’s Russell Square the other evening. Several bystanders were injured, one fatally. The suspect was Tasered by the Met’s finest and remanded in custody. Knife attacks are rare, but they happen. But when it was revealed that the young man in custody was a Norwegian national of Somali heritage, one corner of the Web rejoiced, for here was an opportunity for clickbait. Yes, the Murdoch-bankrolled Heat Street website, domain of (thankfully) former Tory MP Louise Mensch, went into overdrive, scouring other sites for matches of the suspect’s name. To their clear and unbridled joy, they found a match for Zakaria Bulhan. That match had “flagged up on Good Reads three books on Islam and Islamist theology as texts they intended to read”. And there was more.

“The most interesting, and the one that shows that at the age of 17 this person was at the very least exploring a book which is very clear on urging violent jihadism as a duty of Muslims, is Riyad-us-Saliheen, a 13th century text”. Well, bully for Miles Goslett. The extracts from that text which accompany the article talk of “Jihad” and “fighting in the way of Allah”, but do not even explain what “fighting” entails, far less talk of violence.

That, though, was enough for Ms Mensch to go off the end of the pier in no style at all, ranting “MAJOR EXCLUSIVE: ‘Mentally ill’ Somali in London knife attack 'recommended Jihad terror books’”. He recommended nothing, and the text is not a “terror book”. But do go on. “EXCLUSIVE: CONFIRMED: ‘Mentally Ill’ Suspect Of Somali Descent In UK Attack Studied Jihad before Killing American”. No evidence to stand that up. 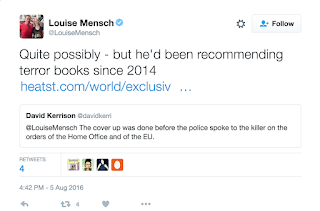 Have another go. “EXCLUSIVE: UPDATE ‘Mentally Ill’ Suspect Of Somali Descent In UK Not a Teenager - is 20 and Jihad Student”. Not 20, and not a “Jihad Student”. Try again. “EXCLUSIVE: Police Cover-Up? teenage 'mental problems' to 20 year old terror jihad books' http://heat.st/2azQ7IG … Truth on Somali killer”. Not truth, nor making sense. 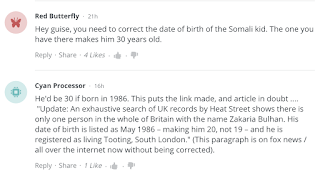 Then all recourse to actual facts was discarded. “EXCLUSIVE: Another Police Cover-Up on Islamic Terror”. No cover-up, no evidence of terror. And finally Ms Mensch indicated her agreement with a frankly batshit claim that “The cover up was done … on the orders of the Police and the EU”. “Quite possibly” was her response.

That much is routine idiocy, but what Heat Street and Ms Mensch are not letting readers know is that they have doctored their “evidence”. Miles Goslett’s original text, still available at Fox News, claims “An exhaustive search of UK records by Heat Street shows there is only one person in the whole of Britain with the name Zakaria Bulhan. His date of birth is listed as May 1986 - making him 20, not 19”. Except 1986 would make him 30, not 20.

... while Heat Street has covered its tracks

This was pointed out by two commenters on Heat Street, with the result that the post has been amended to read “An exhaustive search of UK records by Heat Street shows there appears to be only one person in the whole of Britain with the name Zakaria Bulhan”. Only “appears to be”, and no age given. This whole story is based on shoddy research and downright dishonesty. And the aim is racist incitement.

All of which should make anyone reading it very angry - only not in the way that Louise Mensch intended. And remember, they allowed her to become an MP.
Posted by Tim Fenton at 15:29

I was aware - as it unfolded on Twitter- of some of that desperation to find an Islamist motive and then over extrapolate from uncertain data. There was also a nasty attempt to associate him with Sadiq Khan (because he came from Tooting).

Ms Mensch is like some perverse one-man band that throws banana-skins where it is about to walk then asks people to pay to see her fall over. But - "Incitement"? Come off it. Who is she meant to be inciting, and what is she supposedly inciting them to do?

Here's the book http://abuaminaelias.com/riyad-us-saliheen-by-an-nawawi/ not quite a Jihadi terror book, except perhaps in Ms. mensch's fevered mind.

The Heat Street loonies will obviously have trouble clearing anybody who reads the Bible, particularly the Old Testament. In which readers are regularly urged to make war on, mass murder, torture and enslave unbelievers.

Which, to be fair, so-called christian nations have done their level "best" to comply with.

So why be surprised when some other religious loonies decide "An eye for an eye" is a "good idea."

Not that the Heat Street crackpots could be expected to understand that.